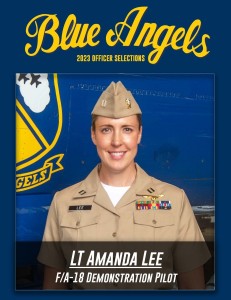 The U.S. Navy Flight Demonstration Squadron, the Blue Angels, selected six new officers to join the team for the for the 2023 air show season. Lt. Amanda Lee, of Mounds View, Minn., is currently assigned to the “Gladiators” of Strike Fighter Squadron (VFA) 106. She graduated from Old Dominion University in 2013.

PENSACOLA, Florida (WDEF) – The Blue Angels have named their new team for the 2023 air show season.

And for the first time, the pilots will include a woman.

Lt. Amanda Lee from Minnesota has been selected as one of their flight demonstration pilots for the upcoming season.

She is an F/A-18E/F Super Hornet pilot currently assigned to the “Gladiators” of Strike Fighter Squadron.

Women have been on the team before, just never an F/A-18E pilot.

“We had an overwhelming number of applicants from all over the globe this year,” said Capt. Brian Kesselring, commanding officer and flight leader of the Blue Angels. “We look forward to training our fantastic new team members, passing on the torch, and watching the incredible things this team will accomplish in 2023.”

The Blue Angels will perform at the Smokey Mountain Air Show in Knoxville in September.

And Lt. Lee will be part of the team at the Great Tennessee Air Show in Smyrna next June.

Should your doctor test you for anxiety?