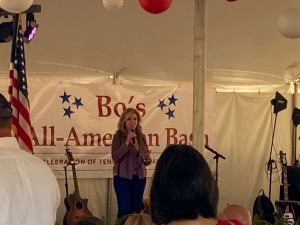 CHATTANOOGA, Tenn. (WDEF)- Republicans know how big the stakes of the upcoming midterms are for the future of their party.

Tennessee State Senator Bo Watson is a longtime representative from the Hixson area for District 11. Sunday afternoon for his birthday, he hosted “Bo’s All-American Bash” at Greenway Farms in Hixson. While the Republican lawmakers who gathered celebrated their colleague, their minds were on what will happen on November 8th.

A who’s-who of Republican politicians in Tennessee made their way to Hixson including, Hamilton County mayor Weston Wamp, Congressman Chuck Fleischmann, and Senator Marsha Blackburn among others.

Bo Watson said the idea behind the event was, “This is a get out the vote gathering of Republicans because we realized, you know, that you can’t win if people don’t vote. So it’s really important for Republicans and the Republican Party, stand up and be counted in Tennessee, in Hamilton County, and in Georgia as well. I think that’s why Senator Blackburn is here, to try and encourage Republicans to get out and vote.”

There was a discussion on a variety of issues weighing on the minds of these lawmakers. Tennessee State Representative for District 26 Greg Martin said that the most important issue for Republicans to focus on are, “The economy which includes inflation, and you have to have the right policies, which I do think we have in Tennessee. That’s why we are the number one state in the country with economic viability.”

There was a lot of optimism among the Republicans in attendance who said they are expecting great success on Election Night. Congressional Representative Chuck Fleischmann predicted that, “Our Congressional delegation will go from 7 to 2 Republican to 8 to 1 Republican. We’re probably going to pick up some seats in the State House. We are looking very good in Tennessee. That’s the good news. The great news, all across America, I’m looking at polling data that shows we are going to take over the House of Representatives, so the Republicans will win the House. It will be a big night. Even better news, the United States Senate is trending Republican, so I expect a very, very good night for Republicans. That means a very good night for America.”

Early voting is now open for Tennessee voters, and Senator Watson shared that those numbers in Hamilton County could be improved.

Neither Tennessee United States senator is up for re-election this year with Senator Blackburn facing re-election in 20-24, with the major statewide race being the gubernatorial race.