Four months before he was found dead in a shallow grave, an Illinois boy described possible parental abuse to a doctor, according to state child welfare records released on Friday. The records say Andrew “AJ” Freund told a child welfare investigator in December 2018 that a bruise on his hip was caused by his family’s dog, but later told an emergency room physician: “Maybe someone hit me with a belt. Maybe mommy didn’t mean to hurt me.”

The timeline that detailed the state Department of Children and Families’ (DCFS) multiple interactions with the five-year-old before his April 15 slaying led local representatives on Friday to decry what they called a “failure” of the state’s child welfare system and question why welfare workers did not remove the child from the home despite numerous “red flags.”

“This is a senseless tragedy,” Rep. Celina  VIllanueva told DCFS leaders during an Illinois House of Representatives appropriations committee hearing Friday. “There’s a child no longer in this world because the system failed him and the system failed his family.”

Acting director Marc Smith, who recently took the reigns at DCFS, said Friday a full review of the agency’s interactions with the family is underway and that the investigator and supervisor involved in the case have been placed on administrative duties. Smith described an agency plagued by underfunding and a lack of resources, but pointed to a proposed budget appropriation that would fund 126 extra workers, reduce caseload for investigators and improve oversight.

“We can and must do better,” Smith said.

AJ’s remains were found wrapped in plastic and buried in a remote area near Woodstock, Illinois, about seven miles from the boy’s home, Crystal Lake police chief James Black said Wednesday. The child’s parents, Andrew Freud Sr. and JoAnn Cunningham, have been charged with murder, battery and other counts. The parents initially reported the child missing April 18, saying he vanished overnight, but after being confronted with cellphone evidence provided information that led to the remains, Crystal Lake police said.

A coroner determined he died of blunt force head trauma, and prosecutors allege in criminal complaints the couple forced him to stand in a cold shower and beat him repeatedly.

The family had a long history with DCFS. AJ was removed from his parents’ care when he was born with opiates in his system in 2013, but was ordered by a judge to be re-united with the family 18 months later after the parents underwent drug treatment and parenting classes, according to the DCFS timeline. Prior to AJ’s birth in 2012, Cunningham was the subject of two reports via the state child welfare hotline, the timeline said — one alleging that she was using prescription drugs and neglecting a foster child, and the other that she was abusing prescription drugs and neglecting her older son, now 18 and living with a different family.

Both reports were ruled unfounded.

After AJ was returned to the family in 2015, the agency continued to supervise the family until a judge closed the case the following year.

In March of 2018, another hotline report naming both parents alleged “substantial risk of physical injury and environmental neglect.” The report said Cunningham had been brought to an emergency room after being found unresponsive in a car and AJ was seen to have odd bruising on his face. The agency interviewed Cunningham at the home twice the next month, found the boys to be clean with no signs of maltreatment, and verified Cunningham was in a drug treatment program. The hotline report was also ruled unfounded. 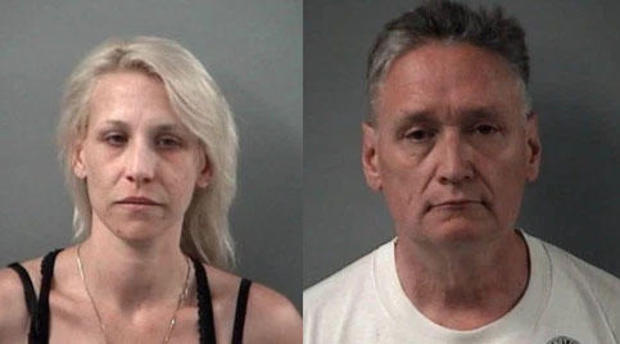 In December of 2018, police responded again to the home after another hotline call alleging “environmental neglect” to AJ and his younger brother as well as cuts, welts and bruises to AJ. Police found the home in disarray, noting it smelled of dog urine. They saw a large bruise on AJ’s hip and protective custody was taken of the boys.

The emergency room doctor who later examined the boy was concerned about AJ’s comment, the timeline shows, but couldn’t determine how AJ was injured. He said the bruise could have been caused by a belt, a football or a dog.

The children returned home with their father, according to the timeline, who denied corporal punishment and denied that Cunningham was using drugs to an investigator during an unannounced visit the next day. In January, the agency ruled the hotline report unfounded “due to lack of evidence for cuts, welts and bruises allegation.”

Representatives on the Illinois house appropriations human services committee blasted that finding on Friday, questioning DCFS leaders as to why the case wasn’t referred to the judicial system, especially given the family’s long history of contact with the agency.

“Wouldn’t this raise red flags immediately?” said Rep. Anna Moeller. “There was no court involved here, DCFS never went to the court to ask he be taken out of that environment. It was allowed to persist.”

A DCFS official admitted missteps in the case, saying the DCFS investigators should have further interviewed the boy, and the case should have been refered to a child abuse specialist for a second opinion because the doctor couldn’t determine the nature of the injury.

Moeller questioned why the agency wasn’t more oriented towards removing children from homes “where they are at risk and could potentially die.”

The agency, which has seen high turnover in top leadership, has been under fire since the deaths of two other children whose families had contact with the agency. Gov. J.B. Pritzker in March ordered an independent review of DCFS after a two-year-old Decatur girl died of starvation and deprivation and a two-year-old Chicago boy died with bruises and rib fractures, according to the Associated Press.

“No one wants to be in a situation where we’re hearing about another child being murdered by their parents because DCFS felt [the home] was the most appropriate place for them to be,”  Moeller said.

The research center that is conducting the review, Chapin Hall at the University of Chicago, is expected to issue the report of its findings along with recommendations for the agency next month, the AP reports. But Chapin Hall reportedly said in a statement that “with the lowest foster care entry rate in the nation, Illinois has a high threshold for child removal.”

State Rep. Sara Feigenholtz, a Chicago Democrat who chairs the House Adoption and Child Welfare Committee, told the Associated Press lawmakers have to answer the question of whether the threshold for child removal is too high or whether the workers are “not aware of them or are poorly trained.”

“I think we all have a great deal of questions, but I will tell you this that this has to end,” Feigenholtz told the AP. “It has to be fixed.”