That’s why she wanted to bring Grover along on a special adventure. Thorsen was climbing her first “14er,” a mountain over 14,000 feet, and thought taking a photo of Grover at the top would make Declan’s day. “This is just kind of a way for his favorite stuffed animal to have a little adventure,” she said. “And see a summit top and hopefully inspire him someday to climb mountains with me.”

Thorsen made it to the top of Colorado’s Quandary Summit and snapped a photo with the blue muppet. But on her way back down, Thorsen realized too late that Grover wasn’t secure in her bag. He was lost somewhere on the snow-covered slope. “The zipper was wide open. So, I started freaking out,” she said.

The mom knew her son would be devastated to know his beloved Grover didn’t make it back down the mountain. She decided to reach out to other climbers for help. Thorsen posted in a “14ers” Facebook group, explaining what happened.

“Lost on Quandary Peak today. Reward if found!” she wrote, sharing her photo of Grover at the top.

The mom made a plea for help to fellow climbers, and the right person saw the post. Jennifer Thorsen

“Today I bagged my first 14er. I brought my son’s favorite toy, Grover, to the top with me as I wanted to surprise him with this,” she wrote. “Somehow, I lost Grover on the way down somewhere about halfway down the last summit push to somewhere in the top portion of treeline. Please, if you find him, please contact me! My heart is broken that I won’t be flying home with my son’s favorite stuffed animal!” 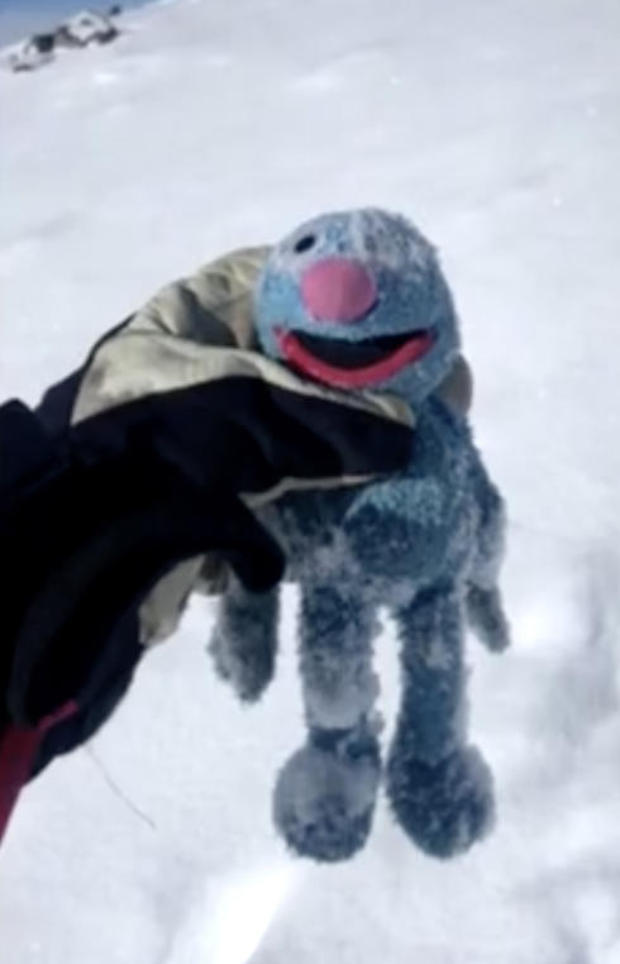 Fortunately, the right climber saw that message at the right time. Michael Thomas, another member of the “14ers” Facebook group, climbed Quandary Peak just days later. He had read Thorsen’s message, so when something blue caught his eye, he had a hunch about what it was.

“And all of a sudden, there to my left is this blue little toy,” Thomas explained. “I was like, ‘Oh my gosh, there is no way that I just found this.'”

Sure enough, the blue little toy was Grover, who was now turning icy and pale. Thomas snapped a photo and sent it to Thorsen.

He brought Grover home in Texas where it’s warm and safe, and will soon ship the stuffed animal out to Illinois where the Thorsens live.

Thorsen updated her post in the “14ers” Facebook group. “Grover has been found,” she wrote. “I love the climbing/hiking community!”

The muppet went on quite an adventure, and thanks to a kind stranger with a keen eye, he’s making his way back to his best friend after a long snow day on the top of a mountain.