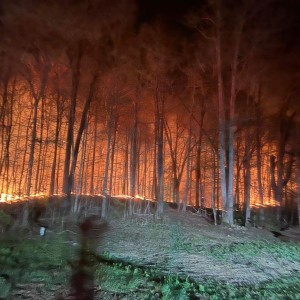 Cleveland, Tenn (WDEF)- A brush fire occurred late Wednesday night and continued into early Thursday morning just south of Cleveland in Bradley County.The fire began around 11 PM Wednesday on a ridge between Blue Springs Church Road and Tunnel Hill Road in the Blue Springs area of South Cleveland. By 1 AM Thursday the fire was 50-60% contained and at its peak was about 80 acres in size. Fortunately, by 2:15 AM the fire had been contained and no longer posed a threat to the public.

Downed power lines due to high winds caused by a severe storm system were the cause of the blaze. The National Weather Service in Morristown reports that the Cleveland Regional Jetport recorded a wind gust of 45 mph on multiple occasions late Wednesday evening.

No injuries were reported as the blaze remained away from any structures. There were no evacuations ordered by Bradley County officials at any time. The United States Forestry Service remained on the scene to clear the fire break to keep it contained. There were some power outages that the Volunteer Electric Cooperative was called in to fix.

This brush fire was one of numerous fires across Eastern Tennessee and other portions of the South as powerful gradient winds combined with relatively low dew points created a ripe environment for brush and wildfires. Some of the largest wildfires as of Thursday morning were located in Sevier County outside of the popular tourism town of Pigeon Forge. Winds in the highest elevations were predicted to reach hurricane force in advance of the storm system.