Car drives up with more fentanyl during Sequatchie drug raid

Fentanyl pills, meth and marijuana confiscated along with guns 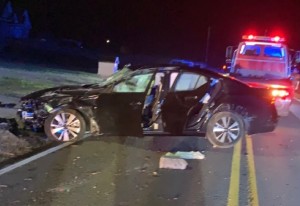 DAUS, Tennessee (WDEF) – Sequatchie County deputies are looking for a suspect who drove up on their raid of a suspect drug house.

Deputies and narcotics officers were serving warrants at a home in the Daus community, south of Dunlap, on Thursday.

The Sheriff says the warrants were the result of a long investigation and they recovered fentanyl pills, meth and marijuana.

While they were at the house, the sheriff says a car drove up with four juveniles in it to deliver some fentanyl.

The vehicle fled and crashed in the 7800 block of East Valley Road.

There were some minor injuries.

But the driver escaped and is still on the loose.

Sheriff Bill Phillips praised the work of his officers and the Drug Task Force.

“Multiple investigations over the past several weeks have led to several arrests, dangerous drugs taken off the streets and continued investigations.”

More To The Story with Staley: Pat Blankenship