CHATTANOOGA, Tenn. (WDEF)– News 12 confirmed with WJXT that the police report shows that the suspect, Gregory Norwood, is from Chattanooga. It says that he attended Ooltewah High School. Local media also confirm that 29-year-old Melvin Owens was a suspect in the car Norwood was driving.

Owens was arrested on warrants for aggravated battery charges out of Tennessee. Norwood was charged with driving without a license, fleeing police and resisting arrest.

JACKSONVILLE, Fla. (WJXT) – A U.S. marshal shot a suspect Wednesday afternoon on Meadowbrook Boulevard, off Beach Boulevard, across from the Alhambra Theatre & Dining, the U.S. Marshals Service confirmed to News4Jax.

A source told News4Jax that the shooting victim and a second man were taken to UF Health Jacksonville and both were expected to survive. The source said the second man was bitten in the hand by a K-9, but officials have not released details. Their injuries are said to be non-life-threatening.

The shooting apparently took place following a pursuit of an SUV that began about 2 p.m. in Jacksonville Beach. 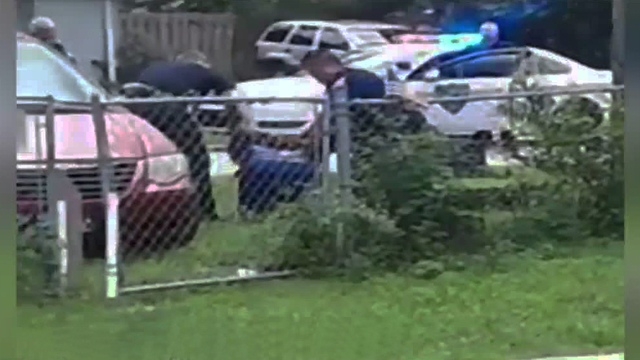 The chase ended in front Tiffany Thomas’ home. Moments after the shooting, she recorded cell phone video showing two suspects being taken into custody just feet away from her home, where her 12-year-old daughter and mother-in-law were sleeping inside.

“My gate was open. The guy was going into my yard when the cops stopped him,” Thomas said. “”It scared the crap out of me because I don’t know what would have happened if I wasn’t at home, or if my daughter was up at that time, playing outside with her friends. She could have ran into the guy and things could have been a whole lot worse.”

Thomas said the shirtless man had dreadlocks and was captured in her yard by Jacksonville police officers with a K-9. She said the officers were armed with stun guns and used them on the suspect.

“I was inside my house sitting there and my dog started acting funny,” Thomas said. “I looked outside and there was this guy and a whole bunch of cops pulled him and rammed him into my van. He was on the ground, they were tasing him. Then they picked him up and started searching him.”

She said the officers searched her yard for a weapon but didn’t find one.

“It scares me to death. It petrifies me. My daughter is only 12 years old and it’s sad she has to live in a world like this,” Thomas said. “If the cops weren’t there in time and I had to go to work today … I don’t know what would have happened.”

Picture per WJXT in Jacksonville, FL

Others found themselves just feet away from gunfire.

“It was really scary,” said Steve Webber. “I see gentlemen running around with machine guns and shotguns and I had no idea what was going on, so I took everyone from my office and put them back, then locked the door so we could be safe.”

Sabrina Edgell said she was pumping gas at that intersection when she saw the pursuit end, then heard three or four quick shots.

“I heard the sirens so I looked and there’s a car with both back tires shot out — an SUV. It turns right here, goes through the gas station and you see it right there, where it landed,” Edgell said, pointing at the SUV less than a block down the side road. “I was running, trying to hide. It was a little scary.”

A man named Chris said he saw the chase from beginning to end, and even snapped a photo of one suspect on a stretcher.

“I saw the burgundy SUV come south on Hodges, veer right onto Beach. Behind that were two marked JSO SUVs and several unmarked vehicles,” Chris said.

It was on Beach Boulevard where one witness said the SUV nearly hit him head-on while the one of the suspects was driving in the direction of oncoming traffic.

“When I look up, I got this red SUV coming directly at me at 60 to 80 mph. I didn’t know what to do. I saw the vehicle hit the median and just miss me by about 100 yards,” Todd Dellobuono said. “It’s very scary.”

The Florida Department of Law Enforcement will be taking over the investigation, according to the Jacksonville Sheriff’s Office. FDLE has not released any information, but agents were on-scene processing two vehicles with bullet holes.

Top ranking JSO officials and a prosecutor from the State Attorney’s Office were also at the scene.

News4Jax crime and safety analyst Gil Smith said that the marshals could have been trying to capture someone with a warrant for somewhere else or been asked to help apprehend someone by a local agency.

“They perceived a serious0enough threat for them to fire on that person. Right now, we just don’t know what that threat was,” Smith said.

The Sheriff’s Office said all westbound lanes of Beach Boulevard were closed until about 5:15 p.m. due to the police activity.