Four year old Khloe Northern and her brother, three year old Keon Stewart were kidnapped from their apartment after their mother was killed.

Investigators determined that Stewart took the children to Chattanooga.

Chattanooga Police and the SWAT team surrounded them Wednesday morning at the Rustic Village Apartments in Brainerd.

After a standoff, they eventually recovered the children unharmed and arrested Stewart. 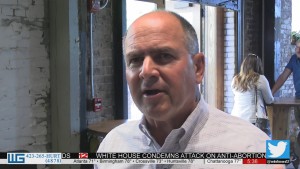