Could football helmet tech protect soldiers on the battlefield?

More than 300,000 service members have returned home with a traumatic brain injury since 9/11. Though the Pentagon says most cases are considered mild, in some cases those injuries have led to the degenerative brain disease CTE. Now, the U.S. military is taking lessons from an unlikely place: the football field. The military announced on Tuesday a contract aimed at redesigning Army and Marine Corps helmets to better protect troops from head trauma.

CBS News’ Carter Evans visited the Seattle-based football helmet company Vicis and got a look at the “smash lab” where machines simulate hard hits on the football field – and the battlefield.

“We’re going to measure the impact forces that get through the helmet to the head,” explained Vicis CEO Dave Marver.

Inside Vicis’s “smash lab” where machines simulate hits on the football field.

After rigorous testing, the company’s main product, the ZERO1 helmet, was ranked No. 1 by the NFL in reducing the severity of blows to the head, which can help protect players from traumatic brain injuries and CTE. Seattle Seahawks quarterback Russell Wilson is an investor and one of the company’s strongest advocates.

“You still take hard hits to the head, don’t get me wrong, you know, and those hits are still there. But the thing that happens is it reduces the impact,” Wilson said. “You feel better… You don’t feel as woozy sometimes.”

Now, Vicis has been approached by the military to see if they can bring their technology to combat helmets.

Vicis CEO Doug Marver says the outer shell of military helmet is designed to primarily stop bullets and shrapnel – not necessarily to protect from blunt impact. Current military helmets are lined with foam padding. To improve on that, Vicis plans to replace the foam with their own liners, which are designed using dozens of small, bendable columns that compress and move to absorb incoming force. 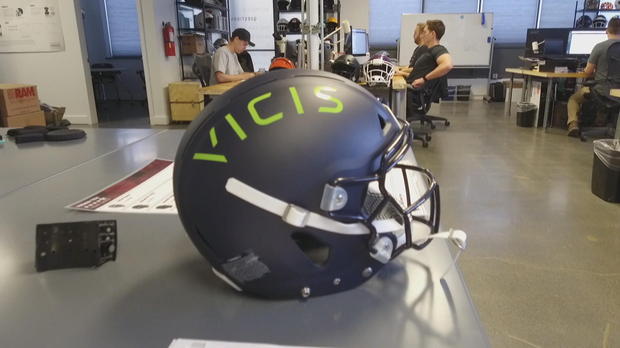 “We’ve shown we’ve reduced the impact forces by 30, 40 percent relative to the foam pads that are currently in the Army combat helmets,” he said. “We’re sure hopeful that it’s going to make a big difference in the lives of our servicemen and women.”

Retired Army sergeant Tim Lovitt served in Afghanistan and Iraq. He didn’t realize he had suffered a traumatic brain injury until he returned home and had problems with short-term memory.

“I recall being exposed to between 30 and 40 blasts,” Lovitt said. “This is a debilitating injury. … You just don’t feel like a whole person and it has the potential for folks to get self-destructive.” 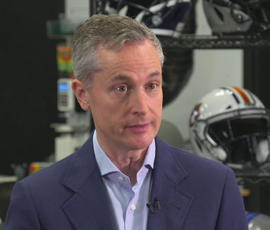 Nearly 20 percent of soldiers have suffered a traumatic brain injury with symptoms including memory problems, persistent headaches and seizures, and behavioral problems like aggression and anxiety.  In some cases, that head trauma can also lead to the deteriorating brain condition chronic traumatic encephalopathy, or CTE.

And it’s just not on the battlefield. The military says 80 percent of these injuries happen in training and non-deployed settings.

But David Hovda, who runs the UCLA Brain Injury Research Center, says there’s a lot we don’t know yet about how much new helmets would help. He says just because lab testing shows a helmet can reduce impacts to the head, it doesn’t necessarily mean it’s reducing injuries caused when the brain hits the inside of the skull.

“I just would like to see the data in human beings,” Hovda said. “I don’t know of any helmet that can reduce the acceleration or deceleration of the brain.”

“How can helmet padding keep that from happening or lessen the impact?” Evans asked Marver.

“Right, well, first I want to be careful that we don’t make any claims with respect to reduction in concussion risk. Our helmet reduces the severity of head impacts,” Marver said.

The new contract with the military will allow soldiers to test the helmet technology.

“It could prevent tens of thousands of people potentially being exposed to this injury,” Lovitt said.