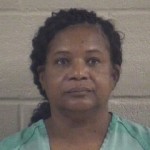 They say she hit him in the back of the head with a glass ash tray and stabbed him in the stomach with a filet Knife.

Prosecutors also brought up another stabbing incident between them in 1988.

But the victim would not cooperate with investigators in the current case.

He did show up at the courthouse for the trial and was served with a subpoena.

But he recanted his earlier statements to law enforcement on the attack from the stand.

Prosecutors did have photos of the victim and crime scene, plus recordings from Cooper in jail telling family members to warn the victim to stay out of state.

She had been out on bond until she was rearrested in October for violating a family violence order.

She has been in jail ever since.