ATHENS, Greece — Two major forest fires raged out of control on either side of Greece’s capital Monday, burning houses, prompting residents to flee and turning the sky over Athens a hazy orange from the smoke. At least seven people were killed in a small coastal town ravaged by fire east of Athens, according to the Reuters news agency.

A witness told Reuters the victims were fleeing in cars or on foot when the flames approached. At least four charred bodies were were seen on a road in the community of Mati, about 18 miles east of Athens. That area was devastated by the fast-moving blaze that started around 5 p.m. local time.

Reuters says that one victim was in a car, another beneath a vehicle. Two people died on a motor bike in what appeared to be a traffic jam heading to a safer area at a nearby beach. Officials expect the death toll to rise significantly.

Regional authorities declared a state of emergency in the western and eastern parts of Attica, the greater Athens area, as coast guard boats headed out to rescue dozens of people trapped on beaches by the flames.

Several other fires broke out across the country, including in northeastern Greece and the southern island of Crete, stretching Greece’s firefighting capabilities. Gale force winds that frequently changed direction were hampering firefighting efforts amid high temperatures that topped 100 degrees Fahrenheit.

Public health officials say at least 25 other people have been hospitalized with injuries, mostly for burns. Three of the cases are considered life-threatening.

Prime Minister Alexis Tsipras cut short a visit to Bosnia on Monday and returned to Athens to preside over an emergency response meeting with fire chiefs and government officials.

“We are doing everything humanly possible to tray and tackle these fires,” Tsipras said before he headed back to Athens. “What concerns us is that there are fires occurring simultaneously.”

A firefighter wears a flame resistant uniform as wildfire burns in the town of Rafina, near Athens, Greece, on Mon., July 23, 2018.

The first major fire broke out in a pine forest near the seaside settlement of Kineta 50 kilometers (30 miles) west of Athens between the capital and Corinth. At least 220 firefighters were on the scene while five water-dropping planes and seven helicopters helped to fight the blaze from the air. Reinforcements were being sent in from across Greece.

The second broke out Monday afternoon in the Penteli and Rafina areas northeast of Athens. Local authorities said children’s summer camps and a seaside resort for military officers were evacuated, while dozens of homes and cars were reportedly destroyed. At least three aircraft and a helicopter were battling the flames, along with more than 60 firefighters.

There was no official figure on how many people were evacuated overall. The coast guard was sending five vessels to rescue people trapped on nearby beaches by the flames. They said initial reports indicated about 80-85 people needed evacuation by sea.

Separately, the coast guard said it had rescued two people who were among a group of 10, believed to be Danish tourists, who had fled the fire in some type of boat then went missing. The pair were pulled from the sea in good health about 3 nautical miles (5.5 kilometers, 3.4 miles) east of Rafina. The coast guard said there were conflicting reports of whether the other eight were picked up by a passing boat.

The fire was burning into the town of Rafina, turning the sky above the nearby port that serves ferries to the Cycladic islands black from the smoke. The highway to the nearby town of Marathon was closed to traffic.

Rafina Mayor Vangelis Bournous said he believed about 100 houses in the area had been burned. The fire service was not able to confirm the figure.

In the first fire, west of the capital near Kineta, three communities were evacuated and the blaze shut down a nearly 20-kilometer (13-mile) section on two highways linking the Peloponnese with central Greece. Thick smoke reduced visibility on the highway to mere meters (yards).

Several houses were in flames, footage from the Greek TV station Skai showed. Some residents used garden hoses to try to save their properties while others escaped in cars and on mopeds.

Hours after the blaze began, flecks of ash swirled down onto central Athens. 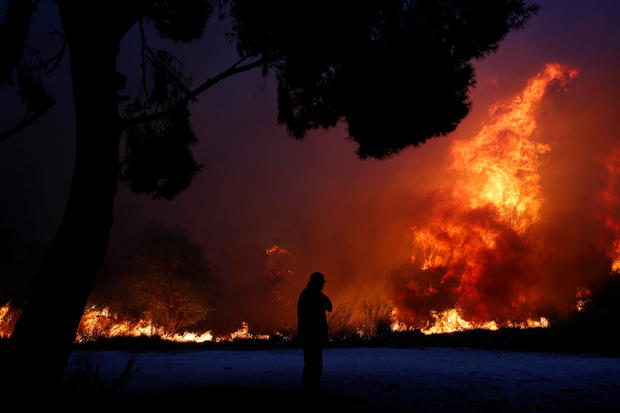 It was not immediately clear how the fire started in the Geraneia mountains near Kineta. Forest fires are common in Greece during the hot, dry summers and the country has been facing high temperatures recently of up to 40 degrees Celsius (104 Fahrenheit).

The fire department also said a third fire was burning farmlands and woods on the southern island of Crete. Two helicopters there were dropping water from the air to help dozens of firefighters.

In northern Greece, another forest fire in the area of Soufli was being tackled by 50 other firefighters, while the fire department said another three fires broke out in the area of Corinth in southern Greece.

The worst fire season by far occurred in 2007, when large swaths of forest and farmland burned, mainly in the Peloponnese in southern Greece, killing more than 60 people.