Delia Owens on “Where the Crawdads Sing”

It’s almost in Canada, with a view of Montana. That’s how remote this northern corner of Idaho really is, worlds away from almost everything, except nature. For writer Delia Owens, it’s heaven. Wildlife is her church, vast isolation her muse.

Does she get lonely out here? “I do. I get so lonely sometimes I feel like I can’t breathe.”

“But you like a part of that though, right?” asked correspondent Lee Cowan.

That book, “Where the Crawdads Sing,” has become a phenomenon. At a recent book fair in Savannah, Georgia, she had readers lined up around the block just to meet her.

The book has become a fixture on The New York Times’ bestsellers list over the last six months. On the day Cowan visited, Putnam (her publisher) gave her a call to tell her that she’d made it to number 1 for the third week in a row.

“They keep sending me champagne,” Owens laughed. “One thing about the success is I have learned how to open a bottle of champagne by myself, [’cause] they keep coming!”

What makes her success all the more remarkable is that Owens, now 70, had never written a novel before.  “I have had such great response form my readers, I just feel overwhelmed with gratitude,” she said.

The book is tough to categorize; it’s a love story, a murder mystery, a courtroom drama, and an ode to the outdoors – all in one.

It took her the better part of a decade to write, inspiration coming whenever it came. “I sleep at night with a little pad of paper in my bed with a flashlight and a pen, and I wake up in the middle of the night and write something down,” she said. “Something that I think is brilliant! And then when I wake up in the morning I’ll look at it and half the time I can’t read what I wrote.”

A thousand such moments became little scraps of gold, like this one: “Sand keeps secrets much better than mud.” That one made it to the book. 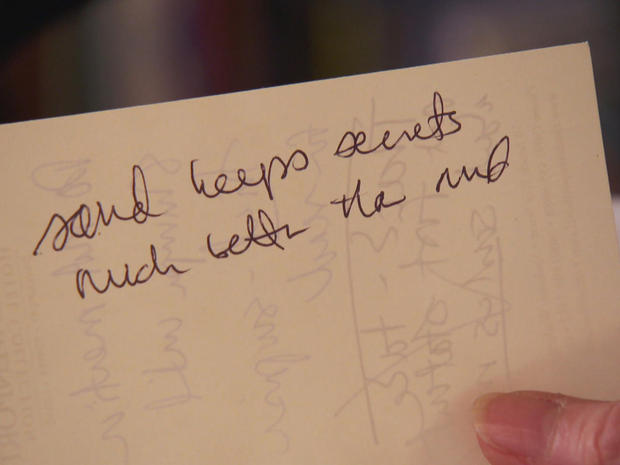 The title “Where the Crawdads Sing” was taken from a phrase Owens’ mother used to use encouraging her tomboy of a daughter to take to the woods around their rural Georgia home, and listen to what those woods had to say. “I learned from a book that crawdads don’t really sing. But I learned from my mother that if you go far enough into the wilderness, by yourself, and there’s nothing but you and nature, you will hear the crawdads sing.”

She took that advice to heart, earning a BS in zoology and a Ph.D. in animal behavior, and at 24 bought a one-way ticket to Africa to put her science background to work. With her then-husband Mark Owens, they made a name for themselves in the wild, writing three books together about their experiences with elephants and lions, even appearing in a 1988 National Geographic documentary, “African Odyssey.”

“We were, at one stage, the only two people in an area the size of Ireland,” Owens said.

“You never saw anybody?” Cowan asked.

“No. Not unless people came to our camp, and that was very, very rare.” 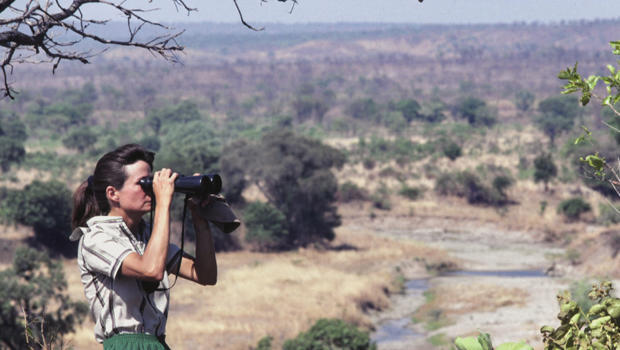 The two have since divorced, but Owens kept on writing. What she wanted to explore was something she felt all those years in Africa, but couldn’t measure, at least not in a scientific way, and that was her feeling of being alone.

“I would watch the lions in the late afternoon, the suns setting behind the dunes, and they’d be playing and tumbling with their cubs and each others’ cubs,” she said. “And it made me think about my girlfriends back home. It made me realize how isolated I was not to have a group. And that was one thing I wanted to write about in my novel, was the effect that isolation and loneliness can have on a person.”

Delia Owens on the inspiration for “Where the Crawdads Sing”

The seed for her first novel was planted.  She chose at a setting a lonely place indeed – a marsh like the one she took Cowan to just off the coast of Savannah … the kind of channel her novel’s main character would come through to her shack when she went to the sea.

Her protagonist is a girl named Kaya, the “Marsh Girl,” as she’s known in town, forced to scratch out a life all by herself in the wilderness after her family abandoned her.

For Kaya, this was her world – the wild, her teacher both in love and loss, much the way Owens herself had found her way through life. 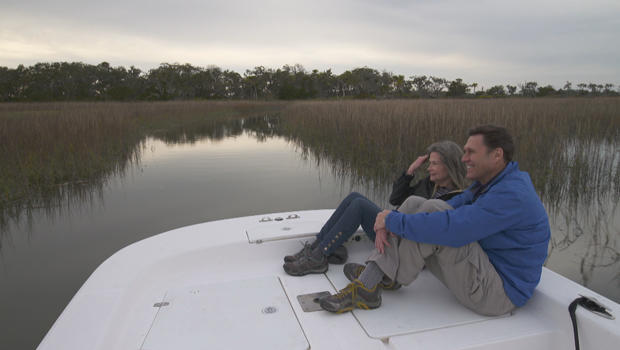 She said, “I feel at home when I’m in a place like this. It doesn’t matter, you can put me in the middle of a desert, or the middle of mountains, when I’m out away from everything else, I feel like I’m home.”

Perhaps that’s why writing fits her so; it’s a solitary pursuit.  But being a successful writer is anything but.

Cowan asked, “Is it hard doing a book tour and all that other stuff when you’re surrounded by so many people and you’ve got so many events and book signings and everything?”

“It’s very hard. I don’t like that part,” she replied. “And to stand up in front of a crowd and talk?”

As she told her audience at the Savannah book fair, “I’ve lived a remote life. I’m not used to seeing so many people in one place. And although I’m sure you’re very nice, the feeling of excitement that I get right now is sort of the same as being charged by lions!”

She can’t put the genie back in the bottle. She’s even sold the rights for an upcoming movie, one Reese Witherspoon is producing. Hollywood, though, is a different animal than she’s used to.

Delia Owens remains a nature girl at heart – happiest way out yonder, just like her mother always always said. “This is where the crawdads sing, right here,” she said outside her Idaho home. “This is it. I finally found it. Took a lifetime, yeah!”