Suspect died at the hospital from the wound 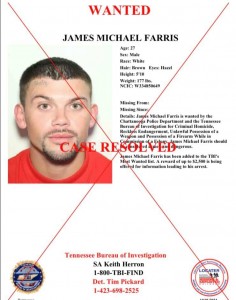 The Tennessee Bureau of Investigation reports that murder suspect James Michael Farris died from the gunshot wound he recieved during his arrest.

The TBI says initial reports indicate that he pointed a weapon at officers who confronted him.

A deputy shot him.

He was taken to the hospital where he died.

No one else was injured.

The report says officers ran him down in a wooded area behind 9700 block of Berry Meadow Way, between Green Pond and Sequoyah Roads.

Since both the Chattanooga Police and Hamilton County Sheriff’s Officer were involved in the manhunt, the TBI will handle the investigation at the request of the District Attorney.

Tennessee Bureau of Investigation
“At the request of 11th District Attorney General Neal Pinkston, TBI special agents are investigating an officer-involved shooting that occurred Friday afternoon in Soddy Daisy, Hamilton Co. More info will be posted as it becomes available.”
________

An officer shot him during the encounter around 3:30.

Hamilton County officials say they had three sightings of him n the Sequoyah Access Road area, on the run.

In two of the sightings, he was armed.

No law enforcement were injured.

Farris was transported to the hospital.

He was wanted for the fatal shooting Wednesday Evening on Shady Vail Lane near I-75 in East Brainerd.

29 yer old Frederick Williams was pronounced dead at the scene.

Officers cornered him on Thursday in the Soddy-Daisy area, but he fled in the woods.

The search for him continued into the night and forced some nearby residents to stay inside.