ATLANTA, Georgia (WDEF) – You could argue the two dominating figures in the Georgia Republican primaries on Tuesday were’t even in them.

Stacey Abrams, who was unopposed on the Democratic side, was the common target for both Republican incumbents and their challengers.

And Donald Trump fueled many of the Republican challengers on the ballot.

The former President personally feuded with both Governor Kemp and Secretary of State Raffensperger, blaming them for his loss in the state in 2020.

And the other challengers to other state jobs fully backed his claim that the Georgia vote was stolen.

However, Governor Kemp easily defeated Perdue in a blowout.

And the others who chose to run for re-election also hung on.

Here is the breakdown: 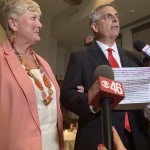 Brad Raffensperger narrowly avoided a runoff with 52% of the vote against 3 challengers, including Trump endorsed candidate U.S. Rep. Jody Hice.

He was a particular target of the former President who said he allowed Democrats to illegally steal the election.

Raffensperger vigorously defended his actions against Trump-team lawsuits and rejected, categorically, his claims of a fixed result.

He also pivoted to position himself as the leading defender against Democratic claims that Republicans changed voting rules to suppress votes.

Incumbent John King claimed 70% of the vote to win the Republican nomination.

He faces the winner of a Democratic runoff on June 21 between Janice Laws Robinson and Raphael Baker.

Incumbent Richard Woods defeated his Republican challenge with 72% of the vote to face Alisha Thomas Searcy in November.

The tightest race in Georgia was for the open Lieutenant Governor seat.

This one was wide open after Geoff Duncan declared that Donald Trump’s claims of a rigged election were nonsense.

And then he promptly announced he would not run for re-election.

It is still too close to call whether State Senator Burt Jones has avoided a runoff.

Jones is the other former UGA football player endorsed by Donald Trump.

He calls himself a key backer of the Georgia election reform package passed this year.

Nguyen is Democratic nominee for Georgia secretary of state

Here are the races in today's runoffs in Georgia and Alabama