Details on chase of shoplifting suspect into Georgia on Sunday

RINGGOLD, Georgia (WDEF) – A wild chase on Sunday started with a suspect throwing a drink on a clerk and ended with a police dog chasing down a suspect.

The incident started around 10:30 AM at a Mapco on Rossville Boulevard near I-24.

Police were called for a shoplifting case.

The clerk got into a dispute with the suspect, who through a drink on her and left.

Police found the suspect on the side of the interstate and tried to arrest him.

They got into a fight and the suspect managed to get into one of the Chattanooga Police cars and drove off.

Officers then began chasing the stolen marked car into Georgia, down I 75.

A Georgia Trooper eventually performed a pit maneuver at the Tunnel Hill exit and stopped the vehicle.

Suspect Christopher Parker then ran into some woods.

The dog found him and deputies arrested him without incident.

“I commend K-9 ‘Fraya’, her handler deputy Penson, and all of the responding officers who ended the pursuit and captured Mr. Parker without serious injury,” said Sheriff Sisk. “The successful outcome is the result of the excellent working relationships with our law enforcement partners, their training and dedication to serving our citizens.” 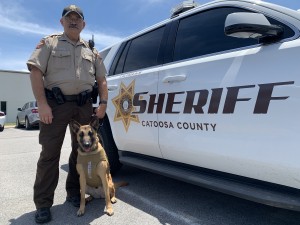