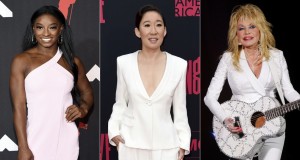 Olympic gymnast Simone Biles appears at the MTV Video Music Awards in New York on Sept. 12, 2021, left, actor Sandra Oh appears at the season two premiere of “Killing Eve” in Los Angeles on April 1, 2019, center, and Dolly Parton appears in concert in Nashville, Tenn., on July 31, 2015. People magazine has named Biles, Oh, Parton and the nation’s teachers as its “People of the Year.” (AP Photo)

“This year has been a transformative one, pushing us all to create something new and hopefully better for our lives,” the magazine said. “This issue reflects that spirt: Our People of the Year cover stars have all led the way in their fields to help make the world a little bit better.”

Parton was cited for giving away millions of books and supporting COVID-19 research and Oh was celebrated for fighting anti-Asian hate and working on “transformative stories.” People said Biles’ focus on mental health “redefined what it means to win in sports.” And the nation’s more than 3 million teachers have “gone above and beyond to ensure our nation’s kids have bright opportunities ahead.”