Edison, N.J. — When you reach a certain age, just getting down to the driveway can feel like a full day’s work. But for 97-year-old Benny Ficeto of Perth Amboy, New Jersey, overcoming those stairs is just the beginning of his workday.

Two days a week, he clocks for a four hour shift as a bag boy at the local Stop & Shop. Benny used to be warehouse supervisor for a cosmetics company. He supposedly retired back in the 80s, but he’s been doing odd jobs ever since because he says he loves a hard day’s work and always has.

He said his first job was shining shoes at around 7. After that, he went to barber school before joining the military. Benny served in the Army Air Force during World War II. He was a gunner on a B-25 Mitchell bomber, flying mostly over northern Africa and Italy.

Today, his Italian casualties are far less consequential, but he still approaches his job with that same tireless, warrior-like, determination. For example, Benny said he’d sooner stack a honeydew on white bread than loaf around on the job.

Mike Moss, the assistant manager said if he tells Benny to take a break, he’ll yell at him. “I don’t want to stop. Don’t tell me how to work. See the light on, that’s where I’m going,” Benny said.

“I get a feeling that I did something good. You can’t just stand around, like an idiot. You have to have a reason to keep alive,” he said.

For Benny, that reason is to go out and earn – not just a paycheck – but a purpose. He said you need to contribute at all times. And avoid breaks at all costs. 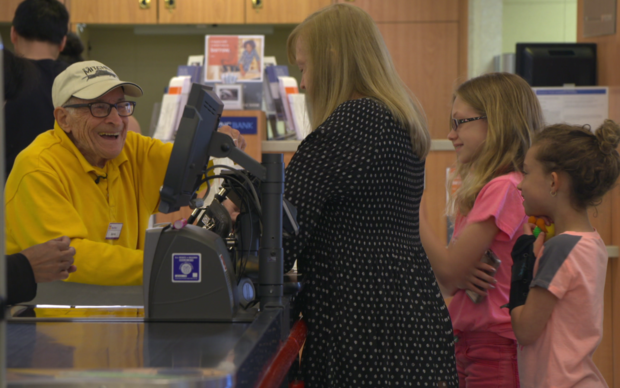 To contact On the Road, or to send us a story idea, email us: OnTheRoad@cbsnews.com.