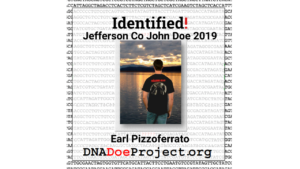 JEFFERSON COUNTY, Tenn. – A 2019 homicide victim found at Douglas Lake was identified as Earl Pizzoferrato of Knoxville on Monday, according to the Tennessee Bureau of Investigation. They say the investigation is ongoing.

Nearly three years ago, an individual reported a suspicious golf bag on the shore of Douglas Lake in Dandridge to the Jefferson County Sheriff’s Office.

Deputies determined that the bag contained human remains on March 10, 2019. They received assistance from the Tennessee Bureau of Investigation (TBI).

Investigators say they were unable to determine his age, race, or how long he had been dead.

Earl Pizzoferrato was adopted, which made genealogy complicated for investigators, the DNA Doe Project said. They say that both parents were identified, but no children were mentioned in their obituaries.

A relative confirmed that all children in the family were placed for adoption, which investigators say helped them solve the case.

The Tennessee Bureau of Investigation is requesting that anyone with more information calls 1-800-TBI-FIND.