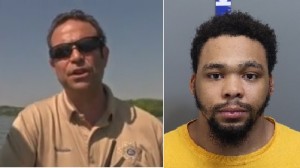 EAST RIDGE, Tennessee (WDEF) – East Ridge Police have dropped charges against a suspect and disciplined an officer for an arrest in December.

Chief Stan Allen says he was made aware of a potential problem with the arrest on Tuesday.

The incident involved a loose dog running in the yard of an off-duty police officer.

The officer called police to report a problem with the neighbor.

The chief says the neighbor’s son and a Kadron Locklin were chasing the dog.

Allen says the officer told them to get the dog out of his yard and Locklin responded with profanity and a threat.

He says when he got there, Locklin was headed toward the house and refused to stop.

Locklin was charged with Aggravated Assault and two counts of Reckless Endangerment.

The Endangerment charges stemmed from there being two developmentally challenged people in his vehicle, along with a pistol.

Chief Allen says on his review, he thought the Aggravated Assault charge was “inappropriate.”

In consultation with the ADA, they decided to drop that and the Reckless Endangerment charges against Locklin.

ADA Cameron Williams first told the chief about body camera footage from officer Roistacher which was in the possession of Locklin’s attorney.

The chief says the video from the other officers at the scene had already been purged since no one flagged it.

Chief Allen says officer Roistacher will be suspended for one day because of language he used toward Locklin.

This case does not involve any of the three more recent incidents which have put the department under fire:

2. The takedown of a 70 year old man during an arrest last summer- lawsuit filed

3. The arrest of a woman whose head was slammed into a car window after she refused to allow officers to search the vehicle- lawsuit filed

Do you recognize the man suspected of sneaking out ten fishing rods?