Actress Emma Thompson has reportedly quit the upcoming animated film, “Luck,” citing concerns about filmmaker John Lasseter, who has been accused of sexual misconduct. The Los Angeles Times obtained a letter from Thompson to Skydance management, the production company behind the film.

In the letter, Thompson questioned why Skydance would hire someone like Lasseter, who left Walt Disney Animation in 2017 due to “missteps” with employees. The Pixar co-founder and Walt Disney Animation chief was behind hit films such as “Frozen” and “Toy Story,” and was hired by Skydance earlier this year. Skydance Media Chief Executive David Ellison told staff in a long email that Lasseter was contractually obligated to behave professionally, and Lasseter apologized for his past behavior, the LA Times reports.

Thompson raised a number of pointed questions about Lasseter’s hiring, including: “If a man has been touching women inappropriately for decades, why would a woman want to work for him if the only reason he’s not touching them inappropriately now is that it says in his contract that he must behave ‘professionally’?”,  according to the letter published by the LA Times.

The Hollywood Reporter reported in 2017 that Lasseter had a reputation for “grabbing, kissing, making comments about physical attributes.”  Although the report also claimed that writing partners Rashida Jones and Will McCormack departed “Toy Story 4” early after Lasseter allegedly made an unwanted advance, Jones and McCormack issued a statement denying that, and said they left due to creative differences. 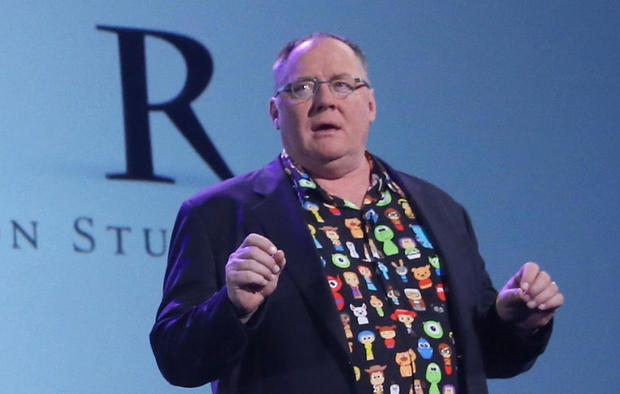 In a vaguely-worded memo obtained by CBS News after his departure from Disney, Lasseter said he knew he had made some employees feel disrespected and uncomfortable. He apologized to anyone who received an unwanted hug or gesture and to those he has “let down.”

Thompson, a two-time Oscar winner, said she regretted leaving “Luck” because “I love [director] Alessandro [Carloni] so much and think he is an incredibly creative director,” she wrote in the letter. “But I can only do what feels right during these difficult times of transition and collective consciousness raising.”

The actress has spoken about the importance of addressing sexual harassment and misconduct in the past. In an interview with the BBC last summer, Thompson spoke about a time her daughter was groped on the subway and was too scared by the experience to speak up. “What we suffer, as women, most from, is our shame in not being able to say ‘why are you doing that?'” she said. “We’re so shocked and undermined by these actions, that we can’t turn around and take the action that we want … We’re so unkind to ourselves.”

Representatives for Thompson and Skydance Entertainment have not responded to CBS News’ request for comment.