WALKER, Minn. (AP) – The Tennessee Bureau of Investigation says three young children who were the subject of an Endangered Child Alert have been found in northern Minnesota.

The bureau said Friday the children were found in Cass County with their non-custodial parents, who have been arrested. The Minnesota Department of Public Safety says someone reported seeing the parents’ vehicle Thursday afternoon, and authorities saw the vehicle in a wooded area near Motley.

Authorities say 6-year-old Analia Essex, 2-year-old Abigail Christian and 1-year-old Michale Christian went missing under suspicious circumstances Tuesday and were believed to be with their parents, who are not legally allowed to have them.

The parents are being held in a Minnesota jail and awaiting extradition to Tennessee on multiple charges. Minnesota authorities are also working to return the children to Tennessee. 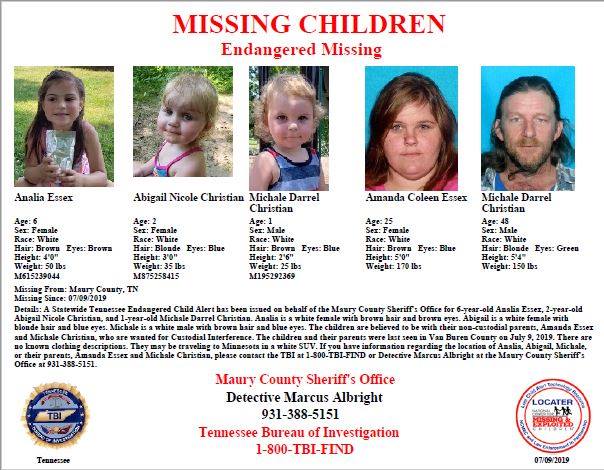