PONTOISE, France — A French gangster on the run for weeks after a dramatic helicopter jailbreak has narrowly avoided capture by a police patrol and had to abandon a car containing explosives, officials said Wednesday. Officers identified Redoine Faid as one of two people who sped away when police tried to carry out a security check on their car north of Paris, a source said Tuesday.

It was the first sighting of 46-year-old Faid since he broke out of prison July 1, whisked away by accomplices in a hijacked helicopter. A source close to the investigation said a “major” search operation was underway Wednesday.

The officers spotted Faid and an accomplice while going to check on a suspicious vehicle waiting near a gas station in the Paris suburb of Piscop.

As they approached it sped off, sparking a police chase which ended when officers found the car in an underground parking garage at a shopping center in nearby Sarcelles.

Police found six packages of plastic explosives and fake license plates in the car trunk, while Faid and his accomplice are believed to have fled via a staircase.

“They escaped by a hair’s breadth,” a police source told Agence France-Presse. “It happened in a matter of seconds.”

Authorities sealed off the shopping center while bomb disposal experts dealt with the explosives. Police were examining CCTV footage from the car park and sweeping the vehicle to confirm traces of Faid’s DNA.

Faid, a career criminal, had been serving a 25-year term over a botched 2010 robbery in which a policewoman was killed, though he claims her death was accidental.

While the hunt for Faid goes on, one of his accomplices from the botched robbery was caught by chance Monday. A police source said Olivier Garnier, who had been sentenced on appeal last April to six years in jail, was picked up at a routine police road check in the Oise department north of Paris.

Around 100 specialist police officers have been working to track down Faid since his spectacular breakout from the Reau prison near Paris.

Two men posing as flight school students, who had already taken an introductory flight, forced a helicopter instructor at gunpoint to fly them to the prison.

The terrified pilot landed in the courtyard, the only part of the prison not fitted with anti-helicopter nets. Two masked men armed with assault rifles used smoke bombs and power tools to make their way to the prison visiting room, where Faid was meeting his brother.

The unarmed wardens didn’t challenge the gunmen, and the getaway was over in less than 10 minutes without a shot being fired.

Police found the chopper dumped by a highway about 40 miles away with the interior torched. The pilot was also found, shocked but unharmed.

Later, two getaway cars were discovered, one abandoned in a shopping center. Both had been set on fire.

Faid, who has multiple convictions for armed robbery, had escaped from prison once before, for six weeks in 2013. He has said he modeled his infamous bank and armored car heists on Hollywood crime thrillers like “Heat,” once even personally thanking movie director Michael Mann for being his “technical adviser.”

He has cited movie characters such as Tony Montana in “Scarface” as an inspiration and said he discovered his “calling” at the age of 12.

On July 10, investigators found a stash of guns, masks and a cement cutter in the Oise region north of Paris which they believe belonged to his gang.

A white Renault Kangoo, a vehicle Faid is known to have used, was also found in the Oise, where Faid grew up. 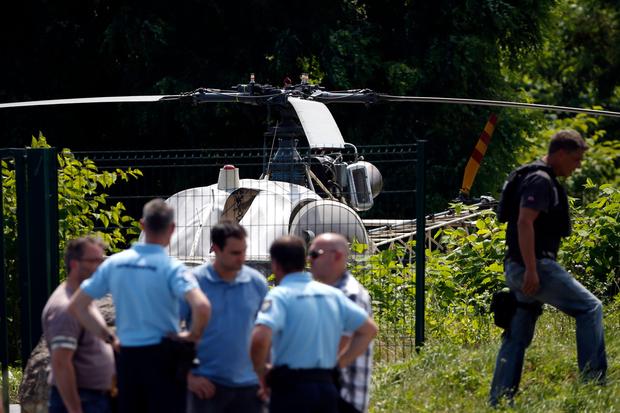 Police near a French helicopter abandoned by gangster Redoine Faid  in Gonesse after his escape from prison in Reau, July 1, 2018.