However, before Bispham moved to California, he taught at A.W. Spalding Elementary School in Collegedale.

The 30-year-old graduated from Southern Adventist University. According to sources close to Bispham, he also coached little league and worked at a summer camp during his time in Tennessee.

Spalding Elementary’s administration fired him in 2013 after he was charged with a DUI. That’s when court documents say he moved to California to continue to teach in the Adventist schools there.

According to spokesman Tim Hensley, Bispham was never employed by the Hamilton County School system.

Those close to him said the news of the accusations came at a shock. They said he was a well-known, well-loved teacher at Fresno Adventist Academy — in fact, one of the students’ favorites because he took time to build relationships with them and play games with them.

Tuesday, a Fresno County judge ruled after hearing evidence from police officers that there is enough for Bispham to stand trial for 18 counts of sexual assault. He has pleaded not guilty to all charges and has refused a plea deal. 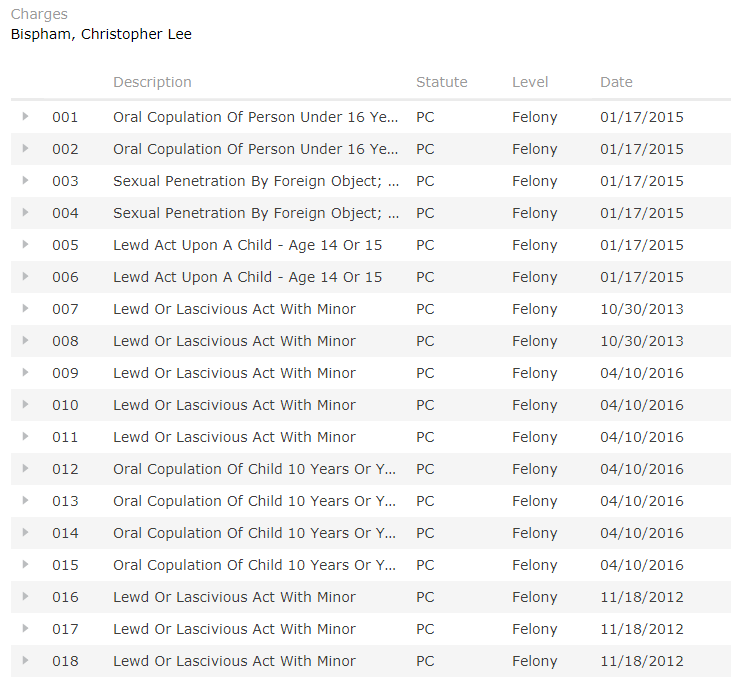 Bispham could face 260 years to life in prison if found guilty, according to the prosecutor.

“He did not come to California and just boom he’s all of a sudden a pedophile,” Tami Pafford with “Teachers Against Predators” said. “He began grooming boys here day one, literally day one that he arrived. So we are concerned that it dates back to before his arrival time here in California.”

The time frame Bispham is believed to have worked in the area is from 2009-2013.

Pafford has started a nonprofit to increase education and awareness of potential sexual predators in school systems.

If you have had any contact with Bispham during his time in the Chattanooga area and are not sure who to call, you can contact Pafford’s “Teachers Against Predators” at 808-319-9188.

Bispham is also named in a civil lawsuit for assault, sexual battery, and neglect, among other things. The civil case is scheduled for trial in November of 2020. The Central California Conference of Seventh-Day Adventists is also targeted in that lawsuit.