Facebook and Instagram, which Facebook owns, are making big changes in how you see political and issue ads on their platforms by marking them with new “paid for by” labels. Clicking on the label will show an archive of details on how much was spent and the people the ad reached, including data on age, gender and location of the viewers.

“We think it’s incredibly important that people have full transparency. By the way, not just with political and issue ads. We’re taking a broader view so that people can see who are running ads across all types of categories,” Facebook’s vice president of global marketing solutions Carolyn Everson said Friday on “CBS This Morning.” 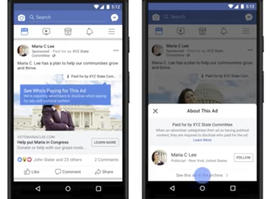 Facebook came under fire for its lack of transparency after Russians used Facebook ads in an attempt to meddle in the 2016 presidential election. CEO Mark Zuckerberg also testified at a congressional hearing last month about its user data scandal involving consulting firm Cambridge Analytica.

“We are doing everything we can to ensure the integrity of elections, especially ahead of the midterm elections,” Everson said. “So this is one very critical step to go through verification process but it’s not the only step. We are using technology with machine learning as well as people to evaluate whether or not those ads are legitimate. And we’re also asking people on Facebook to report ads so you can click on the right-hand side of any ad on Facebook and you can tell us a lot of things actually.”

The European Union’s new law called the General Data Protection Regulation, or GDPR, which gives users control over how companies can collect their personal data, goes into effect today. Facebook is addressing the issue in the U.S. as well, according to Everson.

Everson, who said she has been at Facebook for seven years, called this “an incredibly important moment” for the social media giant.

“I think this is probably the biggest cultural shift that I have seen being led by Mark, but the entire company understands the enormous responsibility we have to protect people’s privacy, to reduce the spread of fake news and to ensure the integrity of our elections.”