Crews were battling a new fire Friday that erupted in Southern California. The Maria Fire grew in just a few hours to more than 8,000 acres.

The blaze was just one of many wildfires to explode in California during a period of dangerous fire conditions. Those fires have burned more than 101,000 acres in three weeks.

Hundreds of firefighters raced to respond. Ventura County officials warned the mountainous terrain may make containing the fire a struggle but assured the community it would not see a repeat of 2017’s catastrophic Thomas Fire.

That fire engulfed more than 280,000 acres, destroyed nearly 1,100 structures and resulted in two deaths. Earlier this week, Ventura County was already facing the Easy Fire, which was mostly contained Friday.

East of Los Angeles, firefighters made progress on the Hillside Fire, which destroyed at least six homes in San Bernardino Thursday. Matthew Valdivia was asleep when the flames spread to his home.

“Everything was just glowing in flames in the back of the house,” Valdivia said. “I just woke up my wife, and I told her, ‘Hey, get the kids, get in the car.'”

Fire officials were confident the Maria Fire would grow to a maximum of 12,000 acres. Officials said the fire was moving toward an area where it would simply run out of vegetation to burn. 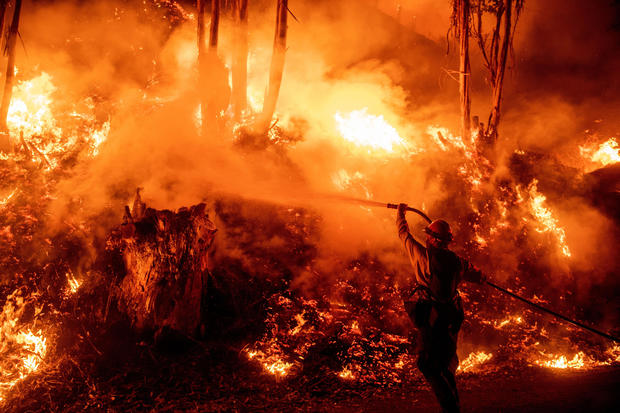 Firefighters work to control flames from a backfire during the Maria Fire in Santa Paula, California, on November 1, 2019. Josh Edelson/AFP via Getty Images

Investigators said Thursday the 46 Fire in Southern California’s Riverside County began at the end of a police chase, when a stolen car barreled through fences into a large open field, damaging its tires and disabling the car.

Heat from the car’s wheels apparently ignited a fire that engulfed it and sparked a vegetation fire in the field. The car’s two occupants of the car tried to flee on foot but were caught, police said.

All evacuation orders related to the 46 Fire were lifted Thursday night, according to Cal Fire Riverside.

Pacific Gas & Electric said Thursday night it had restored power to “essentially all” the 1.1 million homes and businesses affected by blackouts it instituted Saturday and Tuesday in an attempt to keep its equipment from sparking wildfires as strong winds hit Northern California.

The much-maligned utility said it’s identified 156 instances so far of weather-related damage and hazards that might have ignited blazes if it hadn’t cut power, and it’s checking out hundreds more reports of damage.

PG&E was blamed by fire officials Wednesday for two fires in eastern Contra Costa County over the weekend that led to a number of evacuations.

“We only had seconds to get out”

More than 700 firefighters were fighting the Easy Fire Thursday. The fire ignited just before dawn Wednesday, and flames raged into the night, fueled by wind gusts up to 70 mph, CBS News correspondent Carter Evans reports.

It quickly consumed a barn, where volunteers helped rescue animals trapped inside. One horse even seemed to turn back to lead other horses to safety.

Despite an all-out assault, flames still managed to jump a freeway, forcing a nearby neighborhood to evacuate. “We put everything in the car, and I’m so glad we did, ” said Frank Rahimi of Moorpark, “because by the time it jumped the 23 Freeway, we only had seconds to get out.”

Crews in Southern California battled numerous fires Wednesday. The winds were powerful enough to knock over big rigs along an interstate, yet vigilant firefighters kept spot fires from exploding.

While CBS News correspondent Carter Evans was talking to Ventura County Fire Captain Anthony Romero, a spot fire popped up right next to a fire engine. “Just like that,” Romero said. “What you got to maintain, for us, is just constant awareness that the fire is going to keep moving. We want to maintain our vigilance just because it is an active firefight.”

“This will only get worse in the future”

A recent study published in Earth’s Future suggests that the increasing size of wildfires occurring across California in the last 50 years is attributable to climate change drying out the landscape.

“Since the early 1970s, California’s annual wildfire extent increased fivefold, punctuated by extremely large and destructive wildfires in 2017 and 2018,” the researchers wrote. “This trend was mainly due to an eightfold increase in summertime forest-fire area and was very likely driven by drying of fuels promoted by human-induced warming.”

Over the past decade, average temperatures there have risen over 2 degrees Fahrenheit, but the moisture deficit — the difference between the amount of water actually in the atmosphere and the amount of water it can hold — has not caught up. Lower relative humidity causes brush to dry out faster, creating more kindling to burn when a fire starts.

“It’s not likely to get better as we continue to warm the climate,” CBS News climate and weather contributor Jeff Berardelli said. “This will only get worse in the future.”