Nashville, TN (WDEF) – A joint investigation by the Tennessee Bureau of Investigation (TBI) and the Dickson County Sheriff’s Office has resulted in the arrest of the father of Joe Clyde Daniels, the five-year-old who has been the subject of an Endangered Child Alert this week.

Joe Clyde Daniels was reported missing by his parents the morning of Wednesday, April 4th.

The TBI issued an Endangered Child Alert, and law enforcement agencies, search and rescue organizations, and citizen volunteers began a search in the area of his residence.

On April 6th, TBI agents opened an investigation into criminal conduct. During the course of the investigation, and after a three-day search, it was determined that the child’s father, Joseph Daniels, intentionally killed his son sometime during the night of April 3-4, in their residence and then hid his son’s body.

On the morning of April 7th, Joseph Ray Daniels, 28, was arrested and charged him with one count of criminal homicide. 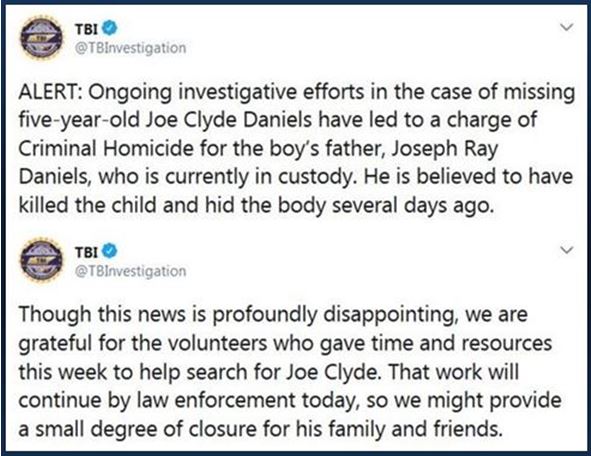