More than half a century after “Fiddler on the Roof” premiered on Broadway, the musical is finding new life in an old language. The well-known story, mesmerizing bottle dancing and iconic songs (“Sunrise, Sunset,” “Matchmaker,” “If I Were a Rich Man”) are still the same, but for the first time in the U.S. the show is being performed in Yiddish.

There are English and Russian subtitles projected on both sides of the stage at Stage 42 in New York City, where the show is now playing off-Broadway. Whether or not you follow along with the words on the screen, you can feel the raw emotions emanating from the characters whether it’s the first or 50th time you’ve seen a version of the show. Nor do you have to know Yiddish — the language once widely spoken by Jews in Eastern Europe — in order to understand and appreciate the show. The plot of “Fiddler on the Roof” revolves around a milkman named Tevye (Steven Skybell) in the pre-revolutionary Russian village of Anatevka as he looks to find husbands for his five daughters with help from Yenta the  matchmaker (“Feud”‘s Jackie Hoffman).

Steven Skybell as Tevye in “Fiddler on the Roof in Yiddish.” Matthew Murphy

Performing in Yiddish “added a different layer that made it more authentic,” explains actress Stephanie Lynne Mason, who plays Hodl, Tevye’s second eldest daughter. “It makes for a really deep interpretation.” It also brings the story back to its roots, since the show was based on a tale by the acclaimed Yiddish writer Sholem Aleichem.

With a book by Joseph Stein, music by Jerry Bock and lyrics by Sheldon Harnick, this reimagined version was translated into Yiddish by Shragra Friedman in 1965 for performances in Israel. It recaptures the soul of the show, adding new depth and dimension to a story familiar to so many. “We are speaking the language that Sholem Aleichem intended these characters to be speaking,” Mason said.

Oscar winner Joel Grey (“Cabaret”) was first asked to direct and star in the National Yiddish Theatre Folksbiene production at the Museum of Jewish Heritage in lower Manhattan last summer for six weeks — even though he doesn’t speak or understand Yiddish. He never learned the language despite the fact that his father, Mickey Katz, was a Yiddish comedian.

“I loved this show from the very beginning,” Grey recalls of seeing “Fiddler” for the first time in Washington D.C. during a pre-Broadway tryout in 1964. “I flew down there with friends who were involved with the production. I have seen almost every production of it since. I always thought I would take a shot at Tevye and it just never happened.” 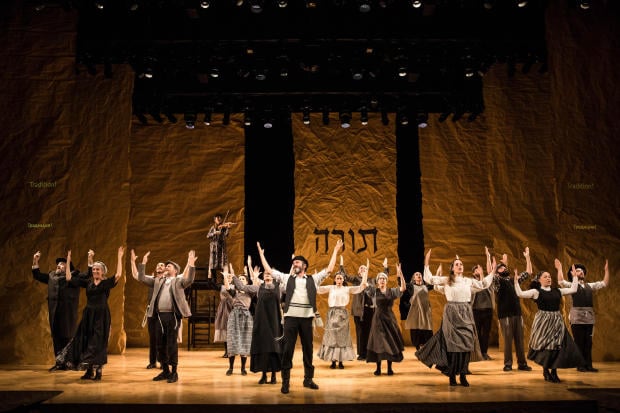 The cast of “Fiddler on the Roof in Yiddish” performs in New York City. Matthew Murphy

He opted not to take on the role last summer and stuck to solely directing. Grey’s downtown production got so much acclaim, the sold-out show kept extending. Celebrities including Hugh Jackman, Jake Gyllenhaal, Tommy Tune, Bette Midler, Bernadette Peters, Mandy Patinkin and Bebe Neuwirth came to see it. The show moved to its off-Broadway home on 42nd Street in January and  has now been extended to September 2019.

“The fact that we got from what was supposed to be a six-week run to this crazy uptown transfer is really exciting,” exclaims Mason. This is Mason’s sixth time playing one of the daughters in a “Fiddler” production, including the most recent 2015 Broadway revival starring Danny Burstein. It’s also her third show with The National Yiddish Theatre Folksbiene, even though she didn’t know the language either.

“They have really great coaches and they give you good recordings,” Mason explains of how she learned the Yiddish lines. “They’re also very good of telling you word for word exactly what you’re saying.”

Drew Seigla, who plays opposite Mason as her love interest, the political agitator Pertshik, had two and a half weeks to memorize the role. Unlike Mason, he’s never done “Fiddler” before but had performed some Hebrew songs in the past, so he felt a bit of confidence going in to it. “It was difficult at first,” he says of the learning process. “They gave us a whole audio mp3 file of how to say every single line as slowly as possible, so you don’t miss any minute detail. Then, they say it again in the right flow and cadence of the phrase.” 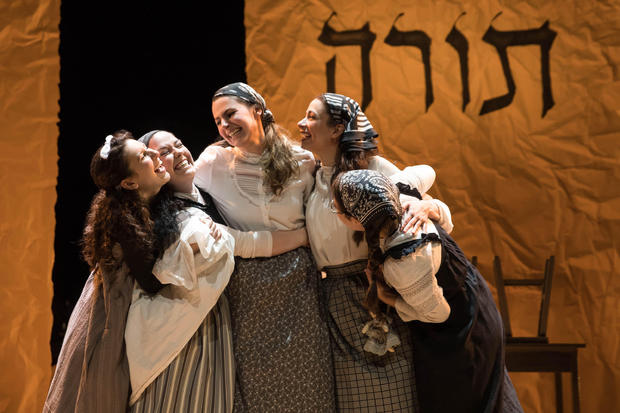 Stephanie Lynne Mason, 2nd from right, plays one of the five daughters of Tevye the milkman in “Fiddler on the Roof in Yiddish.” Matthew Murphy

When the cast began rehearsals Grey started with the basics: the original script. “The first thing we did was we talked through it in English,” Mason said. “We got [the show] up on its feet in English and then added the Yiddish back in so it made for really clear performances.”

“The fact that most [in the cast] were not Jewish and under 30 — there was no turning back,” Grey recalls of his directorial decisions. “We had three or four weeks to put it together and there was no time to second guess. [I] had to go with [my] gut. We were all really sort of like moonwalkers in that we were in unspecified territory.”

With the dialogue in Yiddish, many of the actors wouldn’t have the ability to improvise at all if they forget their lines. If Grey’s watching, he says he wouldn’t know if someone flubs a word but “would know if the moment was not truthful.”

Grey doesn’t know if this production will ever transfer to Broadway but mentions there’s talk of bringing this version to Los Angeles, Chicago or Shanghai. Grey wants to do it in Berlin — which would bring him back full circle to where he filmed Cabaret with Liza Minnelli in 1972.

Mason isn’t sure if she would ever do another version of “Fiddler” after this one. “Never say never. But I almost wouldn’t want to do the show again because I don’t want anything to ruin this experience of it.” Then she adds, “Maybe someday, when I’m old enough to play Golda, but we have a little bit of time. I think that’s what it would take in order for me to do the show again.”

-Leigh Scheps is the senior digital reporter for InsideEdition.com