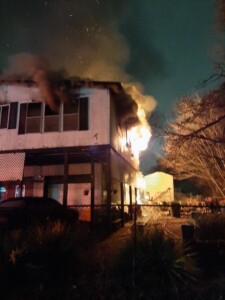 Fire that displaced 8 residents on the 4000 block of Dorris Street in Chattanooga. (Courtesy: Chattanooga Fire Department)

CHATTANOOGA, Tenn. (WDEF)- A fire on Tuesday night has displaced 8 residents in Chattanooga.

Chattanooga firefighters say they were called to a home on the 4000 block of Dorris Street at 10:47 p.m. When they arrived on scene, they found heavy smoke and flames on the right rear side of the structure. The fire traveled up into the second floor and vented through the roof. They had the fire contained by 11:14 p.m.

The residents of the home were able to escape and were uninjured. The American Red Cross is now assisting them.