As the country prepares to celebrate the July Fourth holiday, experts are warning that all the fun with fireworks can be dangerous if you aren’t careful – and sometimes even if you are. Each year, more than 10,000 people are treated in hospitals across the United States for injuries involving fireworks.

Fire Captain Jay Northup, a 23-year veteran of his local fire department, never thought he would be one of them. For years around the Fourth of July, Northup had dazzled his children and neighbors with fireworks displays in his backyard in Euclid, Ohio – a state where fireworks are legal to purchase.

Two years ago, he was all set for the performance again. He took safety precautions but exercised one moment of poor judgment that left him with a life-threatening injury.

With his family and neighbors safely at the front of his house, he set up a launch pad behind his garage with a 12-shot box of mortars. When lit, these fireworks, worth $600, shoot a couple hundred feet into the air.

After he lit them, Northup noticed three of the mortars went off, and then nothing else happened. He waited 10 minutes and then went to investigate the dud. It was dark out and Northup couldn’t see very well. He picked up the cylinder without realizing it was 12 inches below his face when it suddenly exploded.

“I felt like I was awake but had no idea where I was,” Northup told CBS News. “I instantly felt the trauma and my right eye was swollen shut with blood pouring out of it, but at this point I had no idea what it was.”

Lucky for Northup, his wife is an ER nurse and was able to stifle the bleeding and drive him to Metro Health, a Level 1 trauma center, in nearby Cleveland.

There, doctors treated him for a subdural hematoma, one of the deadliest of all head injuries, as well as cuts on his forehead that required 35 stitches to close. He also suffered two ruptured eardrums, second-degree burns, and multiple bruises. 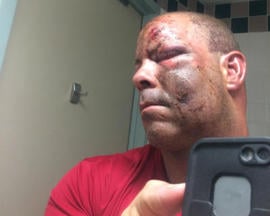 Firefighter Jay Northup just a few hours after the explosion

Once Northup was stable, he saw ophthalmologist Thomas Steinemann, MD, who needed to work to save his sight. The blast left the front part of Northup’s eye deformed, damaging the cornea and bruising the retina. Blood had begun to pool inside his eye, a dangerous condition that can lead to blindness.

Steinemann treated Northup with special eye drops to control the inflammation and medication to prevent infection. Gradually his vision began to improve. Northup was able to return to work 6 weeks after the incident.

However, he wasn’t out of the woods yet. A traumatic cataract began to form in his eye that clouded his vision. About 10 months after his injury, Northup underwent cataract surgery to restore his vision. He made a full recovery, but was left with a permanent defect: his pupil is paralyzed and can no longer expand and contract in different lighting conditions.

“So if you think of your eye like a camera, this would be like the F-stop of the camera,” Steinemann explained. “In Jay’s case, that aperture that lets light in doesn’t adjust to the lighting. For instance, when you’re indoors in low lighting the pupil should get big. When you’re outdoors the pupil should get small. His doesn’t do either one. It will never move again. It’s stuck.”

This often makes it painful for Northup to be outside in bright conditions without sunglasses.

Eye injuries make up about 9,000 of emergency department visits due to fireworks injuries each year. These injuries range from cuts and bruises to damaged corneas, retinas and ruptured eyeballs.

Steinemann says he ends up treating way too many each year.

“These sorts of injuries that we see many times are devastating. They’re blinding. Sometimes the eye gets completely destroyed and we can’t save it,” Steinemann said. “And all of these injuries are preventable.”

Unfortunately, many of those injured are young children.

Seven-year-old Joseph Livingston is one of them. Two years ago he and his family attended a Fourth of July barbecue and were watching a fireworks display. His mother, Marianne Livingston, thought he was at a safe distance of 50 to 60 feet away, but Joseph was hit and suffered second- and third-degree burns.

“The firework went up his shorts leg and was in between his underwear and shorts,” Livingston told CBS News. “Basically caught in there and he caught on fire.” 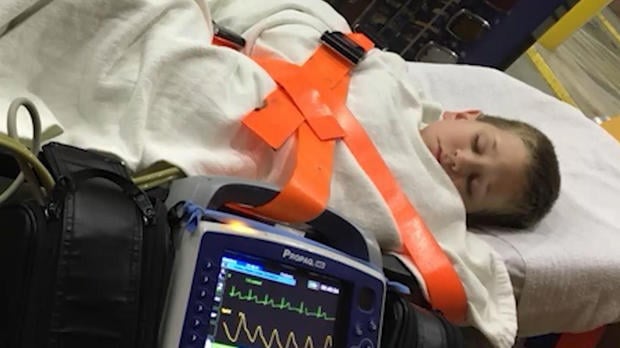 7-year-old Joseph Livingston was seriously injured in a fireworks accident.

Joseph spent four days in the hospital. He needed months of follow-up care. “He still gets very startled at loud noises,” Livingston said.

“Make sure you have a bucket of water there,” she said. “Make sure that you are watching those fireworks at all times. Don’t relight a dud and don’t stand over a firework. It could go off in your face.”

Even a sparkler can reach 2,000 degrees, the same temperature as a blowtorch.

The American Academy of Ophthalmology (AAO) advises that the best way to avoid fireworks injuries is to attend a professional show rather than purchasing fireworks for home use.

The AAO recommends that if you choose to purchase fireworks:

As for Northup, he hopes sharing his story will help deter others from making similar mistakes.

“Let the professionals handle the fireworks,” he said. “Don’t let a split second end up putting you where I’m at.”