Approximately 1,000 people will be diagnosed with cystic fibrosis (CF) this year, according to the Cystic Fibrosis Foundation. A new film and memoir are helping to shed light on the impact of the progressive and frequently fatal genetic disease that affects the lungs and other major organs.

“Five Feet Apart” tells the story of teenagers who meet and fall in love at a hospital where they are receiving treatment for CF. The film debuted this weekend in third place at the box office, earning $13.1 million.

Cystic fibrosis causes a buildup of thick, sticky mucus in the airways leading to the lungs, trapping infections and restricting airflow. It is estimated that more than 70,000 people are currently living with CF.

Cystic fibrosis patients are not supposed to get within six feet of one another for fear of cross contamination, but the protagonists of “Five Feet Apart,” Stella (Haley Lu Richardson) and Will (Cole Sprouse), defy that rule in their own way.

“That’s where ‘Five Feet Apart’ comes from,” director Justin Baldoni said on the “CBS This Morning” podcast. “Essentially these characters meet, they fall in love, they can’t be together and they decide throughout the sequence of events to take back a foot, because this disease has taken so much from them.”

The film was a bit of a passion project for Baldoni, who met real-life CF patient Claire Wineland when filming his documentary series “My Last Days,” in which the dying talk about life and death.

“Claire was a YouTuber and just the brightest light,” Baldoni said. “She was like a little Buddha and had so much wisdom for being 18 and would walk into the room and just in the best way suck the energy out of it. Everybody would look to her and leave feeling like a better person.”

Wineland died last September at the age of 21 after suffering a massive stroke following a double lung transplant.

Before her death, Baldoni hired Wineland as a consultant for the film. She helped the actors portray realistic cystic fibrosis patients.

“I didn’t want to make a shiny, glossy movie that in any way romanticized this terrible disease,” Baldoni said. “I wanted to show the real ins and outs about what it’s like to have this disease so that people could walk away with a newfound understanding of what it means to have it and also a newfound appreciation for life.”

Baldoni said since the first trailer of the movie came out, online searches for cystic fibrosis have increased by 110 percent.

“You can’t cure something if you don’t know what it is,” he said. “So for me it’s just like, how can we be getting this into dialogue, into the mainstream? Because who knows if there’s an 8-year-old girl who’s going to watch this movie, who’s going to grow up to be the scientist who cures this illness?”

Diane Shader Smith is all too familiar with the disease, and is actively doing her part to raise awareness. 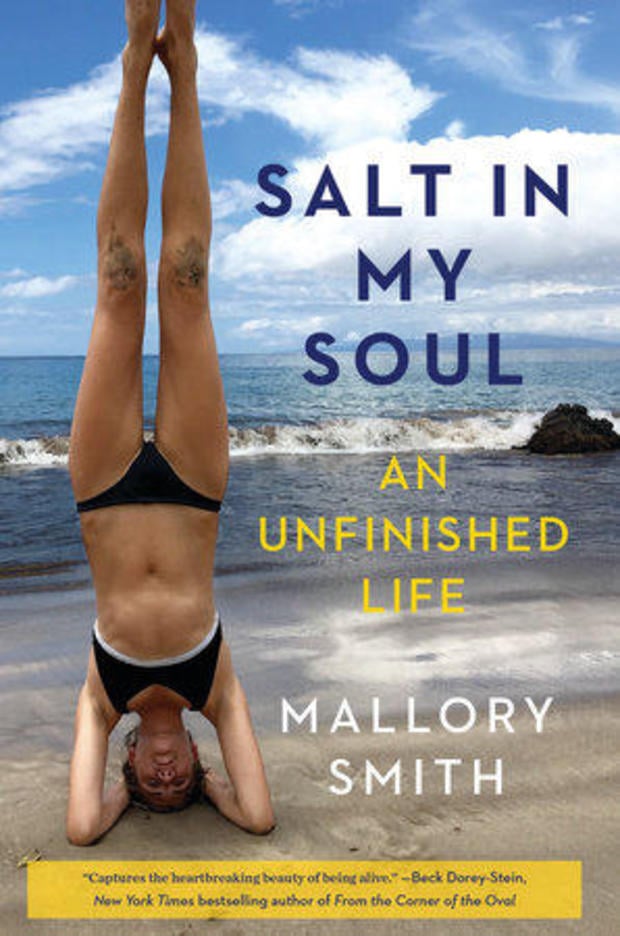 Her daughter, Mallory Smith, was diagnosed with cystic fibrosis at the age of 3. She died in November 2017 at the age of 25, also from complications after receiving a double lung transplant.

For the last decade of her life, Mallory dutifully wrote in a journal, sharing personal details of her disease, friendships and romantic relationships. She left instructions for her mother to publish her writing posthumously.

“Her ability to articulate the difficult things that she dealt with is really what made me understand there was something very special here,” Shader Smith said on the “CBS This Morning” podcast.

The result is a memoir entitled, “Salt in my Soul: An Unfinished Life.” The title is a nod to the fact that salt thins the mucus that builds up in the passages to the body’s organs. Mallory’s CF symptoms, including a cough and difficulty breathing, would subside on family vacations to Hawaii.

Now, Shader Smith hopes her daughter’s words will continue to have an impact. Proceeds from the book will support bacteriophage therapy research, a treatment that uses specific viruses to kill bacteria that become resistant to antibiotics. Shader Smith said she’s receiving messages from people at end-stage lung disease asking how they can get access to phage therapy, which is still in an experimental phase.

“My husband, who is really the phage therapy advocate — I’m the book advocate, he’s really working on the science part of it — he says, I couldn’t save my daughter but I’m going to save others. That’s really what is keeping him going.”

In the meantime, Shader Smith hopes readers get the chance to know Mallory.

“She was beloved across the board,” Shader Smith said. “But really what I would like is for people who are suffering with any of these conditions to see that here is help … There is something cathartic in helping other people when you are going through grief.”