The Broward County School Board voted Tuesday not to fire superintendent Robert Runcie, the embattled schools chief who had been in charge during the deadly school shooting at Marjory Stoneman Douglas High School last year. The measure to have him removed had been introduced by a school board member whose 14-year-old daughter Alyssa was killed in the Feb. 14, 2018, shooting and accused him of exhibiting a “willful neglect of duty.”

Newly elected school board member Lori Alhadeff had listed five items on the agenda why she believed Runcie should be fire, CBS Miami reports. One of the reasons was what she called the failures from security, safety and mental health needs uncovered from the Parkland shooting.

The board voted 6-3 to keep Runcie. A majority of speakers — including schools employees and members of the public — expressed support for Runcie for his vision and leadership, CBS Miami reports.

“I have lived in the city of Coral Springs for over 30 years. I have three children who have graduated under Mr. Runcie,” said community leader Joanne Fletcher. “I am here this morning in support of Mr. Runcie. I have mentored for many years in the Broward school system, I have seen the graduation rate increase, I have seen the changes. Mr. Runcie came to Broward County, he welcomed the community, he destroyed barriers we had in the community. As School Board members you have the opportunity to make history. You can either continue to divide the community or you can strengthen the community by voting to keep Mr. Runcie.”

Lori Hankerson, the first speaker, said she didn’t think “he should be responsible for everything, this man should keep his job.”

Parkland shooting victim’s parents speak out: “Your kids are still not safe enough”

Max Schacter, whose son Alex died in the Parkland shooting, said Runcie has failed the district.

“The most important thing that the superintendent does, or is supposed to do, is protect our children, our teachers and educate our youth. He’s failed on all of those counts.”

Schacter also accused Runcie of allowing academics to slip since he started in 2011. But other speakers highlighted the district’s B grade from the state and the 84 percent graduation rate, a 10 percentage point increase over five years.

The district says it has increased the number of security officers and cameras and taken other security measures districtwide since the shooting.

It was on Valentine’s Day in 2018 when Nikolas Cruz killed 17 people at the school. One year before the shooting, Cruz walked on to campus wearing a backpack and carrying a duffle bag, the school’s security team flagged him as a threat. But that threat was largely ignored when it mattered the most. A school security monitor said he recognized Cruz when he saw him walk onto campus, but didn’t stop him or ask him questions.

Runcie told CBSN at the start of the new school year that he wakes up “every day thinking about our families, thinking about Stoneman Douglas and what else can we do to improve the situation there.”

The district is the nation’s sixth-largest with 327 schools and 270,000 students. 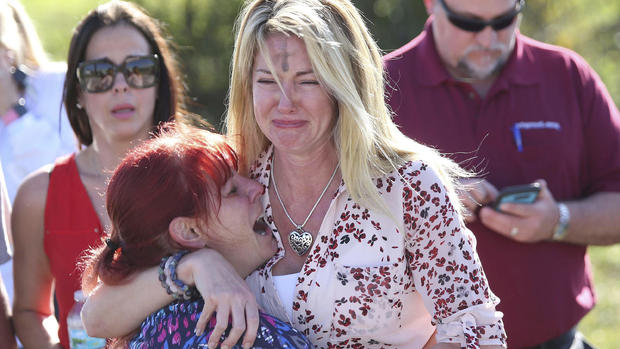