CHATTANOOGA (WDEF) – If you are a fan of the show “Stranger Things,” one of the themes in the most recent season was parents’ reactions to heavy meddle music in the 1980s.

It is a reference to the public debate lead by a Tennessee woman about music of the day. 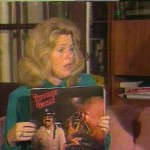 Tipper Gore was the wife of Tennessee Senator Al Gore.

In 1985, she co-founded the Parents Music Resource Center, which lobbied for and got music warning labels on covers of the albums.

She said parents had the right to know about objectionable content in their kids’ music.

Critics called her a censor.

We ran this story on her campaign in 1988, just before Congressional hearings on music that drew critics like Dee Snider (Quiet Riot in the story) and John Denver.

That same year, she campaigned with her husband as he ran (unsuccessfully for President). Four years later, Gore did become Bill Clinton’s Vice President.

But as Al Gore switched from elected politician to climate change activist, the Gore’s split up in 2010.

Despite becoming a target for many musicians in the 80’s, Tipper Gore would mend some fences.

She was a drummer herself in high school.  And she would later sit in for some shows with the Grateful Dead, Willie Nelson and Herbie Hancock.

After the music campaign, Gore would go on to be a strong advocate for LGTBQ community.

Lineup for this year's 3 Sisters Festival