From The Archives: 1991 Oh, Calcutta controversy

1991 debate: Should musical with nudity be allowed at the Tivoli?

CHATTANOOGA (WDEF) – The Tivoli Foundation is at a crossroads these days.

They are still trying to survive the pandemic, while pushing a major expansion to the Tivoli Center complex.

But 30 years ago, they were in the middle of a different kind of storm.

Should the musical Oh, Calcutta be allowed at the Chattanooga theater.

Since the Tivoli was owned by the city, several officials and pundits of the day tried to block it.

The did NOT go on, in this case.

Our 1991 story looks at the efforts to stop the show. 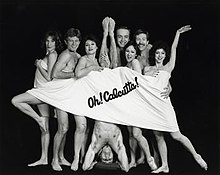 Bill Proposed to Lower Minimum Age for Carrying a Handgun

Massive fire destroys one home, damages another next door in Highland Park