Full-length trailer for “The Lion King” is released

Disney has released the first full-length trailer for the upcoming live action “Lion King” movie, which is expected to smash box office records with an all-star cast. Scar, the villain voiced by Chiwetel Ejiofor, narrates the powerful trailer, which gives fans the first up-close look at the CGI magic used to bring the animal kingdom to life.

The film is set to premier on July 19 — 25 years after the original film was released.

The trailer shows Simba grow from a lonely cub to the ruler of the animal kingdom, while he makes friends with a cast of characters along the way. Donald Glover plays Simba, Billy Eichner plays Timon, Seth Rogan plays Pumbaa and Beyonce plays Nala.

Jones voiced Simba’s father in the 1994 animated film, which was one of the highest-grossing films of all time. The classic Disney movie featured music composed by Elton John and Hans Zimmer.

Zimmer’s iconic score elevates the trailer, which features realistic-looking lions, heynas, birds and waterfalls. Jon Favreau, who also directed the live-action and CGI version of “The Jungle Book,” is back at the helm for this Disney remake.

While the trailer is ominously narrated by Chiwetel’s Scar, it ends with some comedic relief. Eichner’s Timon and Rogan’s Pumbaa galavant through the jungle singing “The Lion Sleeps Tonight.”

Social media lit up with the release of the trailer, which received hundreds of thousands of views in the span of just hours. It also sparked several trending terms on Twitter, from “Mufasa” to “Scar.” 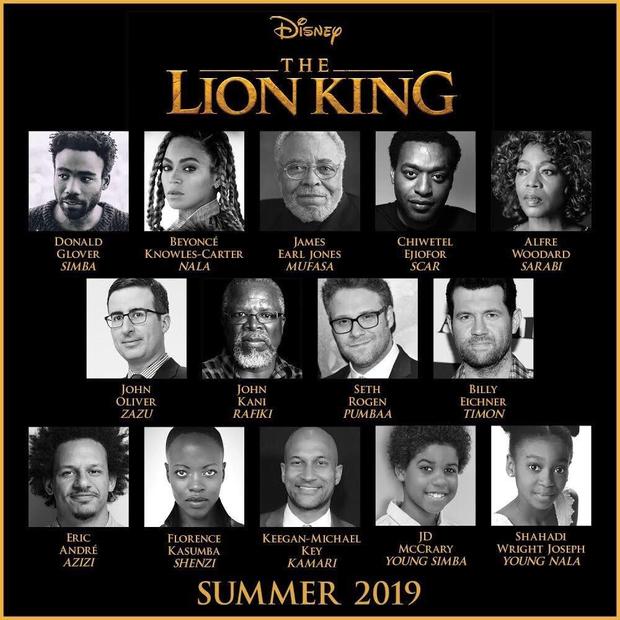 When the first teaser trailer was released in November, Seth Rogan tweeted a cast list – and fans were pleased with the star-studded roster. Disney