With counting continuing in numerous counties throughout Georgia, Secretary of State Brad Raffensperger said that as of 10:35 p.m. today there are approximately 14,097 ballots still outstanding.

“Officials in numerous counties are continuing to count ballots, with strong security protocols in place to protect the integrity of our election,” said Raffensperger. “We have long anticipated – and said publicly – that counting would most likely take place into Wednesday night and perhaps Thursday morning. We’re on pace to accomplish that responsibly, ensuring that the voice of every eligible voter is heard. It’s important to act quickly, but it’s more important to get it right.” 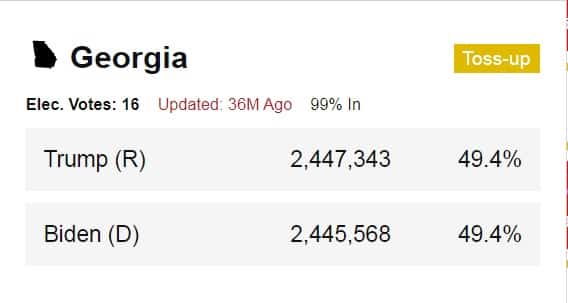 Raffensperger noted numerous security measures in place to secure the vote and increase public confidence in the electoral process:

▪ Absentee drop boxes were locked at 7 p.m. Tuesday evening, preventing illegal voting or potential fraud.
▪ Surveillance cameras monitored drop boxes at all times.
▪ State monitor is in the room with Fulton County for all counts and the public is welcome to observe any county as an added layer of transparency.
▪ A pre-certification audit will provide additional confidence that the votes were accurately counted.

“We’re well aware that with a close presidential election and the possibility of runoffs in some elections that the eyes of the state and the nation are upon Georgia at this time,” Raffensperger said. “We’re as anxious as anyone to see the final results and to start work on certification and planning for our runoff elections. As the work goes on, I want to assure Georgia voters that every legal vote was cast and accurately counted.”

The U.S. Senate race seems headed for another runoff.  While Senator David Perdue will finish with more votes than Democrat Jon Ossoff, he is currently below the runoff line of 50%.  If that holds, Georgia will have 2 Senate runoff races on January 5th (along with Rev. Warnock vs Sen. Loeffler). We may not know which party controls the Senate until then.

There is one ray of hope for Republicans.  Military ballots are still coming in through Friday.  These are votes made by military personnel overseas and shipped to the U.S.  These votes would not be coming from traditionally Democratic strongholds.

Military ballots have always come in late for elections because of the uncertainty of foreign postal systems.  They are generally added to the final, official vote which comes a week after election day.

But this year in Georgia, a court ordered that all absentee ballots must arrive by the poll closing time on Tuesday.  HOWEVER, the order exempted military ballots.  They will be accepted until the end of Friday.

Hooked On Science - Glasses That Will Have You Seeing Christmas