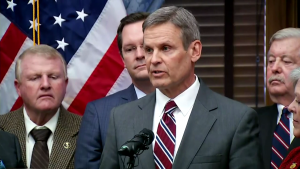 NASHVILLE (WDEF)- Tennessee Governor Bill Lee is pausing executions until an independent review can be conducted of lethal injection procedures that recently paused the execution of Oscar Franklin Smith on April 21. Leading up to April 21, both the United States Supreme Court and Governor Lee had declined to intervene in stopping the execution from occurring, but concerns about the preparation of the lethal injection caused the Governor to grant a temporary reprieve to Smith until a review could be conducted.

The investigation will be conducted by former U.S. Attorney Ed Stanton, who will focus on several key elements of the planned lethal injection. These include the circumstances of why the lethal injection was not tested for endotoxins, the clarity of the process and adherence to it, and staffing concerns with the Tennessee Department of Corrections.

Governor Lee stated that, “I review each death penalty case and believe it is an appropriate punishment for heinous crimes. However, the death penalty is an extremely serious matter, and I expect the Tennessee Department of Correction to leave no question that procedures are correctly followed.”

No executions have been carried out in Tennessee due to the COVID-19 pandemic since February 2020. Smith’s execution was to be the first of five executions scheduled through the rest of this year, but Governor Lee has postponed all of them until at the earliest next year. The Tennessee Supreme Court will set rescheduled dates for the 2022 executions.