The Department of Homeland Security’s (DHS) internal watchdog found squalid conditions in several detention centers for migrant families and children in Texas, including “serious” overcrowding, minors going without hot meals for days and detainees begging not to be returned to their cells, according to a new report released Tuesday.

The DHS Office of Inspector General publicly released the surprising revelations — along with photos documenting the overcrowding in detention cells — on Tuesday after it conducted inspections of five Customs and Border Protection (CBP) facilities in south Texas in June.

“We are concerned that overcrowding and prolonged detention represent an immediate risk to the health and safety of DHS agents and officers, and to those detained,” the report said.

Overcrowding was rampant in the facilities in the Rio Grande Valley. More than 50 women were crammed in one cell designed to hold 40 male juveniles when investigators visited in June. In another one, designated for 41 detainees, 71 men were packed inside, with some of them signaling their prolonged detention to the inspectors.

Along with mass overcrowding in detention cells for children, adults and families, the agency said it found that detainees were held in CBP custody for a “prolonged” periods of time. In all of the inspected facilities, more than 2,500 unaccompanied children had been held for more than three days, a violation of the Flores court settlement that governs the care of minors in U.S. custody. About 50 children under the age of 7 had been in custody for over two weeks, the report said.

According to the inspector general, three of the five facilities were not providing detained children access to showers or clean clothes. In two facilities, minors had not been given a hot meal until the inspectors arrived. 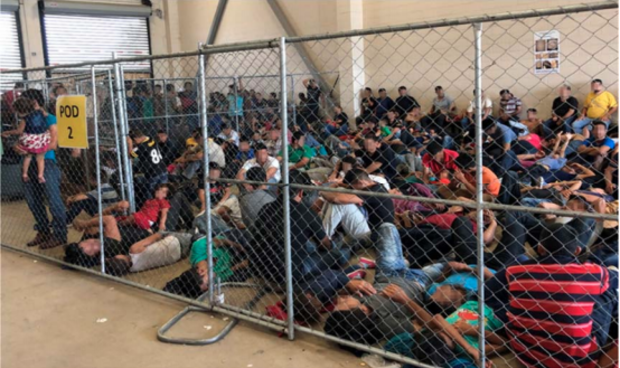 The report also detailed living conditions for detained single adults and families that were so grim that detainees made every effort to not be in their cells. Migrants reported getting constipated because of a strict bologna sandwich diet. Most had not showered while in CBP custody and were instead given cleaning wipes for personal hygiene.

In one CBP facility, migrants who had been removed from their cells while the rooms were being cleaned refused to go back. The desperation got to the point that Border Patrol officers dispatched a special operations unit to demonstrate they were “prepared to use force if necessary.” Some migrants purposely clogged toilets with socks so that they would be released from their cells. The inspector general also noted some migrants attempted to escape during maintenance in the facility. 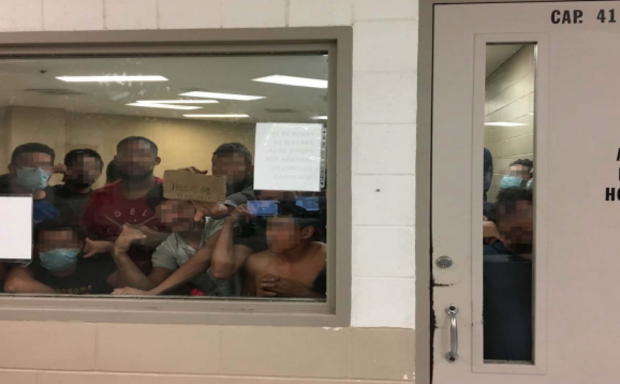 Eighty-eight men in a cell meant to hold 41 people at the Border Patrol’s Fort Brown station in Texas on June 12, 2019. The OIG said some signalled “prolonged detention to OIG staff.” Department of Homeland Security Inspector General

CBP oversees short-term detention for all categories of detained migrants, from single adults to children. Minors in particular are supposed to be transferred to the Department of Health and Human Services (HHS) within 72 hours of their apprehension by Border Patrol officers.

The inspector general said migrant families — who are not supposed to be detained by the government for more than 20 days — and single adults should be transferred to facilities operated by Immigration and Customs Enforcement (ICE), another DHS branch which oversees long-term detention.

But the watchdog noted that both ICE and HHS have warned about dwindling bed space and resources in recent months, when the U.S. faced an unprecedented surge of Central American families and unaccompanied children heading towards the U.S.-Mexico border. Administration officials are expecting border apprehensions — which hit a 13-year high in May — to decline significantly in June.

Although the administration is likely to tout the Mexican government’s efforts to bolster security along its northern border and the one with Guatemala, apprehension numbers in recent years have typically gone down in the summer months, mainly because of the sweltering heat in Central America and Mexico.

The inspector general noted that DHS leadership responded to the report by calling the situation at the southern border “an acute and worsening crisis” and citing new measures CBP has taken to remedy some of the problems. But the watchdog said it was nevertheless worried about the response on the ground.

“We recognize the extraordinary challenges CBP faces, and welcome the information that DHS has been able to reduce the number of UACs in custody. However, we remain concerned that DHS is not taking sufficient measures to address prolonged detention in CBP custody among single adults,” the report said.