CHATTANOOGA, Tenn. (WDEF)- A once bustling industrial heart of Chattanooga is soon to be busy again. The North River Industrial Park off of Access Road in Hixson had its groundbreaking ceremony this morning.

The Park will be on the site of the former DuPont plant that was open for 60 years, and employed thousands in the area. Both city and county leaders say this will soon give Hamilton County some much needed industrial space.

Chattanooga Mayor Tim Kelly said that, “Sam Wells from the state of Tennessee and the Chamber of Commerce brought it to us as a concept and introduced a notion of how we can make it happen. We were happy to get a tax increment financing package approved to make it happen. It’s going to be a fantastic project, and as I said this is probably the biggest project we’ve had since the Volkswagen Plant at Enterprise South.”

Mayor Kelly said that he expects 500-600 jobs to be created over the next couple of years. He also believes there will be green spaces, an extension of the Tennessee Riverwalk to the Northshore, and road construction.

The private real estate firm, Rise Partners, will be heading up the project. 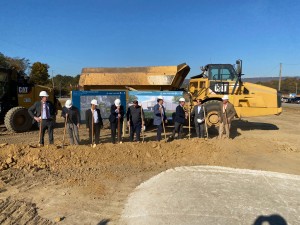 Officials have a ceremonial groundbreaking ceremony at the North River Industrial Park.