It has been said that “into each life, a little rain must fall,” but for 52-year-old Judy Perkins, it’s been a monsoon.

“I had a mastectomy. I had all my lymph nodes out. Ten years later, 2013, I felt another lump on the same side, and this time it ended up being stage four,” Perkins said. “So, I entered the world of cancer patient. Serious cancer patient.”

Despite hormonal and chemotherapy, by 2015, the cancer had spread to her chest and liver.

“I came to realize that I was going to die, and that’s where my mind was,” she said. “I felt bad for my family, but I was grateful for the life I had had.”

Then Perkins found Dr. Steven Rosenberg at the National Institutes of Health (NIH). Rosenberg is a pioneer in harnessing the immune system to fight cancer. Genetic mutations in cells are cancer’s trigger, causing those cells to grow out of control. Rosenberg’s new approach is to find the few immune cells already in the body that can see those genetic mutations and turn them into an army of cancer killers. 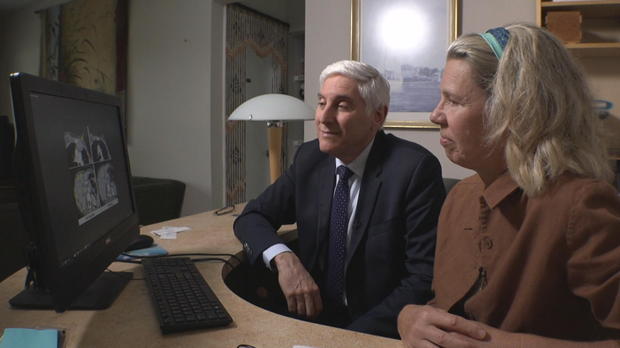 In a lab, Rosenberg’s team grew those few immune cells into billions, then injected them into Perkins’ bloodstream. There, they ganged up to attack cancer cells.

“I think it had been maybe 10 days since I’d gotten the cells, and I could already feel that tumor starting to get soft,” Perkins said. “By then I was like, “Dang, this is really working.'”

Perkins remains cancer free two and half years later. Rosenberg believes the army of immune cells are still at work.

“Circulating in her body are large numbers of cells we administered to her two and half years ago,” he said. “This is just one treatment that’s necessary because the cells are alive. They’re part of Judy. They are Judy Perkins.”

This type of immunotherapy is still in its infancy. But Perkins’ success could open the door to use this kind of treatment for other solid tumors in the lung, colon and elsewhere.