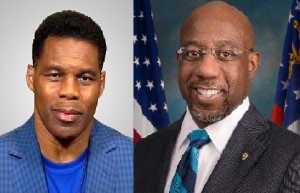 Walker is a political newcomer but has nearly unmatched name recognition in Georgia from his days as a college football running back.

He led the University of Georgia football team to a national title during the 1980 season and won the Heisman Trophy in 1982.

Nguyen is Democratic nominee for Georgia secretary of state

Here are the races in today's runoffs in Georgia and Alabama