On the second day of horse racing season at Santa Anita Park, track officials confirmed another horse was euthanized at the park Saturday after it became injured in an accident. Emtech, a 3-year-old colt, was euthanized after appearing to break his left front leg and crashing to the dirt in the eighth race, CBS Los Angeles reports.

More than 30 horses have been euthanized at the park last season. Many protesters stood outside the gates of Santa Anita Park Saturday arguing that the sport was dangerous and the park needs to go out of business.

CBS L.A. spoke with protesters who found it hard to believe — and disturbing — that another horse had to be put down.

The situation outside the park was tense enough that police had to be called. 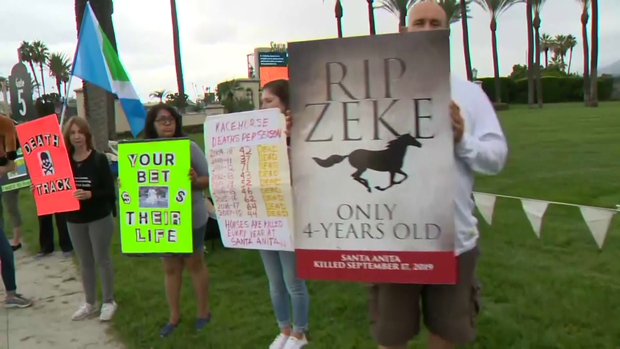 Inside the park, officials said they would work closely with state officials to try to figure out what went wrong.

Emtech will undergo a necropsy at the School of Veterinary Medicine at University of California, Davis.

A 4-year-old gelding named Zeke was euthanized September 16 after being diagnosed with a pelvic fracture after working on the track’s training course, according to The Los Angeles Times.