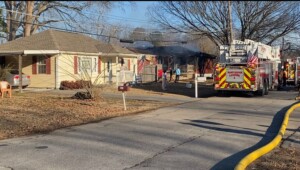 A house on the 4300 block of Duval Avenue in East Ridge heavily damaged by a fire.

East Ridge Fire Chief Mike Williams says around 4 this afternoon a home on the 4300 block of Duval Street caught on fire. The smoke plume from the home could be seen from all over East Ridge.

Firefighters initially believed there was a possible entrapment inside of the home.

Chief Williams said that, “There is somebody that lives here. The homeowner has arrived since we’ve been here. He has confirmed that no one was at home at the time. Neighbors did see a vehicle in the driveway, and reported there was possible entrapment. Since then we’ve found this is not true and no one was home at the time.”

The home is heavily damaged, with Chief Williams saying heaviest damage appears to be the roof but heavy damage was also visible to the walls and interior of the structure. There are some pets inside the home that were yet to be accounted for this afternoon.

Tombras Avenue next to the East Ridge City Hall had to be shut down for fire crews to battle the blaze. A cause for the fire is not known and under investigation.