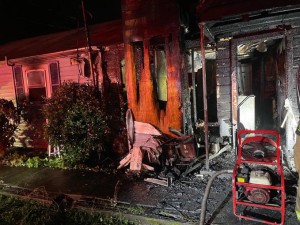 When firefighters arrived at the scene, they found the entire residence engulfed in flames and quickly began to attack the fire. They launched a search inside the house looking for any potential residents.

Fortunately, the three adult residents of the home were able to escape. All three suffered smoke inhalation, with one person needing to be transported to a local hospital while the other two were treated on the scene.

Firefighters were able to quickly get the fire under control and prevented it from spreading to other nearby residences. The cause of the fire is currently under investigation. The American Red Cross is currently assisting the residents affected by the fire.