CORRECTION: The WTVF reporter who first raised the issue of the racist texts says other media are misreporting that Cothren has now admitted to sending them.  Instead, he is saying he doesn’t remember after all this time.

This is a statement that NC5 has posted as a response from Cade Cothren.

“Because this happened several years ago, I can sincerely say it is hard for me to remember things with absolute clarity,” Cothren said in an email to NewsChannel 5 Investigates.

“I can confirm, however, that I have said and done things in the past that I’m not proud of and I won’t hide from that. However, those who know my heart, know that I am nothing even remotely resembling a racist. I believe that all people are created equally in God’s eyes.”

ATTENTION: For all the media out there reporting that Cothren has admitted sending the racist text messages, he has NOT been that specific. His written statement is a reply to a request that I sent him and @GlenCasada yesterday about drug use text messages. @AP

And the he repeated this tweet on their original confrontation.

If you had NOT sent racist text messages, would you NOT deny it when repeatedly given the chance? I haven't heard @GlenCasada explain this response. pic.twitter.com/3LSLTEXDRr

Here is an updated version of the story from the AP:

Chief of Staff Cade Cothren on Monday told news outlets he used the drug at work several years ago but no longer does so.

But Cothren didn’t give a clear response to allegations that during that time frame he also sent texts in which he used racial slurs and called black people idiots. WTVF-TV first reported on the texts last week.

The TV station quotes the 31-year-old aide as saying in an email Monday that because the texts allegedly happened years ago, “I can sincerely say it is hard for me to remember things with absolute clarity.”

This is the original story from the AP on Monday.

According to a statement released Monday, Chief of Staff Cade Cothren told Casada nearly three years ago that he was struggling with personal issues but has since sought counseling.

Cothren says he “sent some” of the racists texts – first reported by WTVF-TV – but he did not elaborate on which text messages he specifically did or didn’t write.

Cothren also said he turned to “maladaptive coping mechanisms” at one point during his career.

Tennessee House Republican spokesman Doug Kufner did not immediately respond to a request for further comment.

The WTVF investigation had capital watchers all abuzz last week after a confrontation between reporter Phil Williams and the Casada team as they got onto an elevator. Here is the story. The racists texts were just a part of the accusation that Cothren had altered evidence against a recurring protester against Speaker Casada. 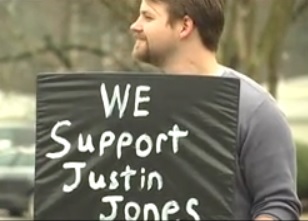 FYI, we got an up close look at the dynamic in Chattanooga in March.

Speaker Casada was the guest at our local Pachyderm Club and the protesters demonstrated here supporting Justin Jones, who was the center of the WTVF report.