A suspect has been charged with what police call the “cold-blooded murder” of an officer in Houston. Authorities said the suspect shot Harris County Deputy Sandeep Dhaliwal in the back of the head as he walked back to his patrol car during a routine traffic stop.

There is heartbreak in the Houston area as neighbors grieved the Dhaliwal’s death late Friday.

Videos like this of him befriending a deaf child are now emerging that show the depth of his connection to community.

The 10-year veteran was shot in the head multiple times as he returned to his car after a traffic stop. The attack was recorded on his vehicle’s dashcam.

In this Aug. 30, 2015, photo, Harris County Sheriff’s Deputy Sandeep Dhaliwal, center, grieves with Deputies Dixon, left, and Seibert, right, at a memorial for Deputy Darren Goforth, at the Chevron where he was killed, in Houston. Dhaliwal was shot and killed while making a traffic stop Friday, Sept. 27, 2019, near Houston. (Jon Shapley/Houston Chronicle via AP) Jon Shapley / AP

“It was senseless,” said Harris County Sheriff Major Mike Lee. “It was a total ambush by the suspect. The deputy never had a chance.”

The alleged shooter, 47-year-old Robert Solis, has been charged with capital murder. Investigators said he has a long criminal history and was wanted for parole violation, but would not speculate on motive.

“To be shot so violently — ambush-style — is just beyond words,” said Harris County Sheriff Ed Gonzalez.

Dhaliwal was a trailblazer — one of the first deputies in Texas to wear the traditional Sikh turban while on duty.

“This is a person from the Sikh community who made history literally from across the globe,” said Houston Mayor Sylvester Turner. 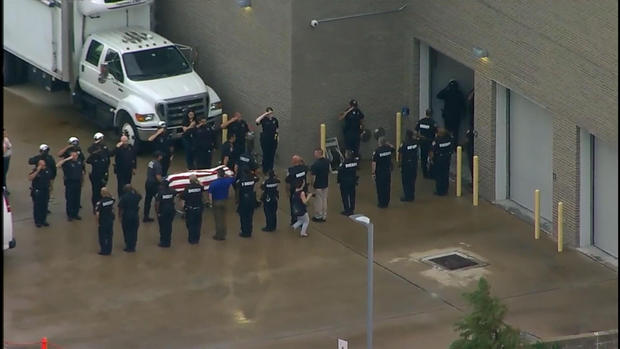 Law enforcement officers were seen saluting in tribute after efforts to save the deputy failed at a Houston hospital.

On Saturday, a GoFundMe page has been set up to support his family. The 42-year-old was a father of three children.