How a rise in food deliveries is changing the restaurant industry

From the oven to the front door. That’s the new mantra for many diners these days, no matter what they’re eating. An increasing number of people are opting to stay home and order in. According to a recent study, the number of deliveries is up 10 percent overall and restaurants are changing the way they do business because of it.

Mimi Blitz is counting on that trend. Blitz opened Pinky’s Space in New York City’s East Village with co-owner and chef Wesley Wobles earlier this year. But don’t expect to sit and eat there. It’s either takeout or delivery.

“We wanted to create happy meals for adults. The game plan was to have a small footprint in the city and focusing on the delivery and the takeout,” Blitz told CBS News’ Dana Jacobson.

Pinky’s Space serves up what Blitz called a hybrid of Southern and French cuisine. They keep the menu simple with staples like brisket and roast turkey to help in delivery, which Blitz says is 75 to 80 percent of their business. With a unique space and few setting foot in it, Blitz’s next goal delivering the atmosphere along with the food.

Mimi Blitz, the founder of Pinky’s Space, hopes their colorful packaging will help bring the ambiance of her establishment to customers

“We bring in a lot of color. … Most restaurants, they just put it in the same kind of to-go containers and we really wanted to stand out even more,” she said. “You go into the restaurant and you sit down, it’s all about the ambiance. In a way, our packaging brings our ambiance to your home.”

The actual delivery made easier thanks to apps like Seamless, Grubhub and Uber Eats, with most providing not just the ordering platform but also the delivery personnel. 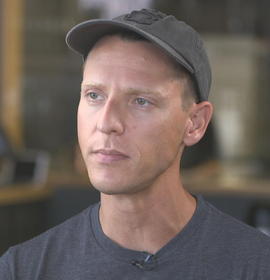 “To do your own in-house delivery — it’s a real undertaking,” Pollack said. “But then suddenly there’s this, like, option of, you know, Seamless or Caviar. They take a commission, obviously, but they make your life a little easier and they allow us to serve a community that otherwise we just don’t have the resources, or the infrastructure or the experience to do.”

Pollack owns two restaurants in L.A. His latest, Cosa Buona, was designed with the evolving restaurant industry in mind. He says about 40 to 50 percent is delivery.

“When I opened it I was much more concerned with just the diner’s experience within these four walls and as I looked at the reality of this industry as not just a creative process, but also a business, delivery became a little bit more interesting,” he said.

So as a chef he tailored his menu to better serve the delivery diner.

“The menu is designed to be delicious, whether it hits the table in 30 seconds or, you know, hits your apartment dining room table in an hour and a half,” he said.

Pollack says the delivery business has also picked up at his other restaurant, leaving him with another challenge. 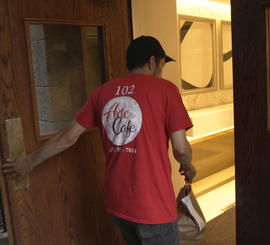 “I think people still go out for a very different reason,” he said. “People come to restaurants, engage with friends of theirs, to engage peripherally with strangers, to be served. I think that will never be replaced.”

“I think what the restaurants have going for them is they’ve got good lighting, good music. They’ve got vibes. They’ve got service. They got a cocktail list. We’re not gettin’ that at home. The difference now is when we’re at home, we’re eating better than we were before,” Rappaport said. “I’ll tell you what it’s dangerous for, it’s dangerous for our pocketbooks. Ordering in has become an increasingly fancier option. It’s no longer the cheap and easy thing to do. It’s easy, but it’s not cheap.”