Hurricane Katrina claimed at least 1,200 lives, but it wasn’t the deadliest hurricane in U.S. history

Willa was “potentially catastrophic,” forecasters warned. The hurricane center said it could make landfall along Mexico’s southwestern coast Tuesday afternoon or evening and bring with it a life-threatening storm surge — especially near and to the south of where the center of Willa makes landfall.

Near the coast, the surge will be accompanied by large and destructive waves. Willa is also forecast to bring high winds and heavy rainfall.

“Slight weakening is forecast to begin on Tuesday, but Willa is expected to be an extremely dangerous major hurricane when it reaches the coast of Mexico,” the center said. 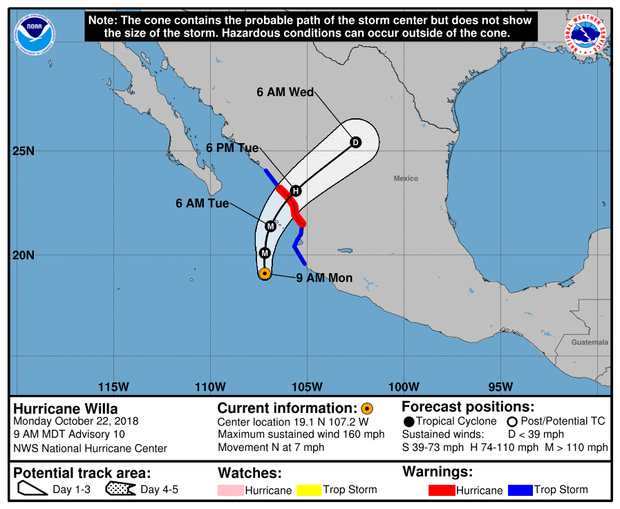 A hurricane warning was posted for a stretch of shore between San Blas and Mazatlan. A tropical storm warning was in effect for Playa Perula to San Blas and north of Mazatlan to Bahia Tempehuaya.

Forecasters said Willa was expected to produce total rainfall accumulations of 6 to 12 inches, with local amounts up to 18 inches, across portions of western Jalisco, western Nayarit and southern Sinaloa in Mexico. The rainfall could cause life-threatening flash flooding and landslides.

Farther inland, Willa was expected to produce rainfall amounts of 2 to 4 inches across portions of Zacateca, Durango, southeast Chihuahua, and Coahuila in Mexico, with local amounts up to 6 inches possible. That could cause life-threatening flash flooding.

After Willa makes its way across Mexico, it could drop between 1 and 3 inches of rain on central and southern Texas during the middle of the week, CBS News contributing meteorologist Jeff Berardelli reports. The additional rainfall could cause additional flooding in already saturated areas.

Peter Martinez contributed to this report.