MEXICO CITY — A newly formed hurricane rapidly gained force off Mexico’s Pacific coast on Sunday and forecasters said it could reach Category 4 status before hitting land by midweek. A hurricane watch was posted for a stretch of shore between San Blas and Mazatlan.

Hurricane Willa was about 260 miles south-southwest of Cabo Corrientes at midday Sunday with maximum sustained winds of 105 mph. It was moving to the northwest at 7 mph, but was expected to start curving toward the north-northeast

The National Hurricane Center said in its midday advisory expected to become a major hurricane by Monday morning and near the coast by Tuesday night. It said the storm could produce dangerous storm surge, while dumping 5 to 10 inches of rain across parts of western Jalisco, western Nayarit and southern Sinaloa states, with lesser amounts falling as it moves inland. 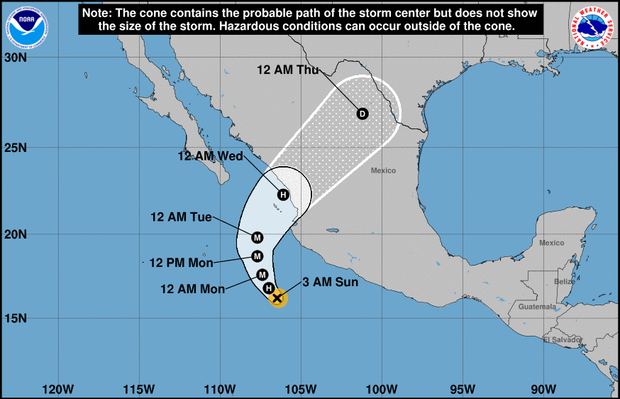 The National Hurricane Center’s projection of Hurricane Willa’s path as of 5 a.m. ET on Sunday, Oct. 21, 2018.

It was located about 100 miles southeast of Puerto Angel with winds of 50 mph.

The Hurricane Center said it could produce 3 to 6 inches of rain near the coast.