It’s hard to envy Federal Reserve Chairman Jerome Powell, whose job as the nation’s central banker has been made harder by the recent actions of the man who appointed him to the post, President Donald Trump.

Powell’s two predecessors could favor a “dovish” monetary policy after the financial crisis eased — cautiously raising interest rates by a quarter of a percentage point every few months or so — thanks to a combination of uneven economic growth and tepid inflationary pressure. But now it looks like the real heavy lifting is about to begin at the Fed.

The job market is at full capacity, with small businesses complaining of a lack of skilled workers as the number of job openings has exceeded the number of unemployed for the past two months. Energy prices are rising fast in the wake of President Trump’s imposition of sanctions on Iranian and Venezuelan crude oil. Last year’s tax cuts have poured gasoline on an economy already running over its natural speed limit and lit a match. Inflation is heating up, with producer prices increasing last month at the fastest pace since 2011.

And now, a worsening trade battle between the U.S. and China, the European Union, Mexico and Canada is set to raise the cost of imports.

Earlier this year, Trump slapped tariffs on foreign washing machines and solar panels. In April, prices for those items gained 9 percent; in May, they added 6 percent more. Both were the largest monthly price increases since the data started in 1977.

Last Friday, Trump imposed higher tariffs on $34 billion worth of Chinese imports with additional tariffs threatened for goods made on three continents, potentially including automobiles and auto parts. Axios reported earlier this month that Trump is considering leaving the World Trade Organization. The situation on trade looks set to get worse before it gets better.

Back to Powell, the Fed and inflation.

For decades, price gains were held in check in part because of the flow of cheap manufactured goods from China and elsewhere. A chart that has been making the rounds at the Fed from economist Mark Perry shows how falling prices for trade-sensitive things like TV sets and toys have helped offset rising costs for things like medical services, housing and education.

This is happening at a time when other inflation antecedents are burning red hot. The New York Fed’s Underlying Inflation Gauge — which adds financial market information to the prices of goods and services to get a more accurate measure of inflation dynamics — recently hit 3.27 percent, the highest level since September 2005.

The UIG tends to lead consumer prices by 15 months. This suggests inflation could rise in the months to come to as high as 2.8 percent — a level not seen since 2006, when the Fed’s policy rate interest rates were around 5 percent instead of the current 1.8 percent. 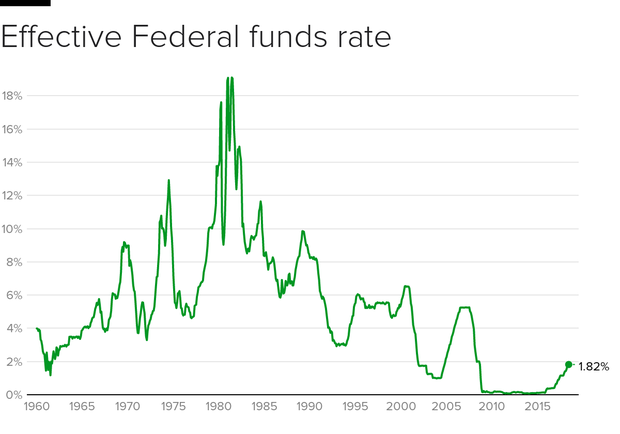 And that means Powell may well need to quicken the pace of rate hikes in response, despite the chilling effect increased retaliatory tariffs on U.S. exports could have on business sentiment and investment spending.

Higher inflation and economic headwinds? That smells like “stagflation” — stagnant economic growth combined with soaring inflation. The bane of any central banker since the last time the U.S. contended with stagflation in the 1970s, the Fed needed to hike rates above 19 percent to kill it.