ISIS claims attack on cyclists in Tajikistan, but offers no proof

The United States Charge dAffaires, Kevin Covert (R) speaks with a man as people come to pay their tribute to the victims of a deadly attack, at the U.S. Embassy in Dushanbe, July 31, 2018.

MOSCOW — The Islamic State of Iraq and Syria (ISIS) has issued a generic claim of responsibility for an attack in Tajikistan that left four cycle tourists, including two Americans, dead over the weekend. Tajik police, however, issued a statement blaming a banned Islamist political party for the attack, in which a driver allegedly rammed his car into the group of foreign cyclists and then joined his passengers in going after them with knives.

Authorities in the ex-Soviet republic in Central Asia were considering an extremist plot among the possible motives for the attack, the country’s interior minister said.

A Daewoo sedan plowed into the group of seven foreign bicyclists about 60 miles south of the Tajik capital, Dushanbe, on Sunday, according to local police. The people in the vehicle then “exited the car and stabbed the cyclists with knives,” the U.S. Embassy in Tajikistan said in a statement Monday.

Four of the cyclists died and three others, including a woman from Switzerland, were injured, Tajik officials said.

Two of the victims were American, one was Swiss, and another was from the Netherlands, foreign and Tajik officials said. Tajik President Emomali Rahmon sent the leaders of each country a telegram expressing condolences Monday. 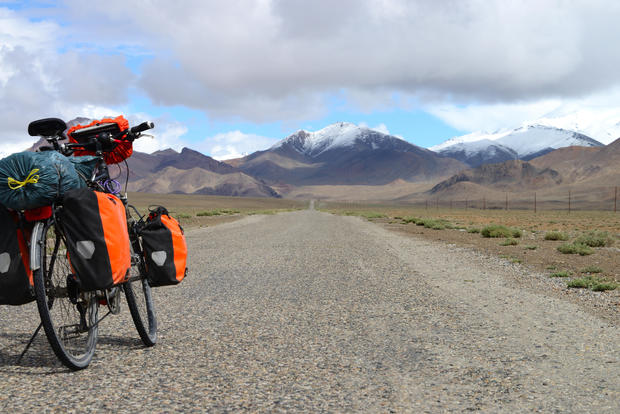 A file photo shows a touring bicycle parked along the M41 Pamir Highway, in the Pamir Mountain Range of Tajikistan.

In a statement online late Monday, ISIS said a group of its soldiers had attacked “citizens of the Crusader coalition” in Tajikistan, but offered no details of the attack or other evidence to back its claim. ISIS has often claimed a role in attacks around the world to raise its profile when in fact the terror group had little or nothing to do with the violence.

ISIS usually refers to the U.S.-led coalition that is fighting it in Syria and Iraq as crusaders. Its statement did not say how many militants took part in the attack.

Citing what it said was the confession of a detained suspect, however, Tajikistan’s interior ministry said the Sunday attack leader was trained in Iran and that the group had planned to flee to Afghanistan after the attack, according to the Reuters news agency. The Ministry blamed the Islamic Renaissance Party of Tajikistan (IRPT) for the attack on the cyclists. That group was banned in 2015, accused of plotting a coup.

Interior Minister Ramazon Rakhimzoda told reporters earlier that one of the survivors had knife wounds and police found knives and guns with some of the suspects. He described the car crash as “an attack,” and said investigators were examining all possibilities, including a road accident, murder and terrorism.

The State Department issued a statement Monday condemning what it called a “senseless attack” and expressing “deepest condolences” to the families of the people killed. The department said it could not provide more information about the U.S. citizens due to “privacy concerns,” but that U.S. officials were working closely with Tajik authorities.

Swiss Foreign Ministry spokeswoman Silvia Mueller said that while the circumstances of the crash were unclear, the Swiss government’s travel advice for Tajikistan notes there is a risk of attacks and poor road travel conditions in the Central Asian country.

“Should it turn out to have been a terrorist act, this would be recorded in the travel advice,” Mueller said.

The State Department encouraged Americans headed abroad to monitor government advisories for updated information on where it is safe to travel.